Shitposting is the language of the internet, now but not forever.

The first thing you notice when you get on the internet in 2017 is how much shit you find there.

It doesn’t matter how well you curate your feeds, pick your bylines, mute your friends, or curb your overall intake: The internet is a scatter of rare and fascinating gems bound together in a vast bed of hot, pulsing shit. The shit means no one is innocent; the shit makes us all complicit. We don’t understand how the good parts of the internet grow out of this horizonless shit, but we may, at this point in a failing civilization, say something about the shit. Hell, by some accounts, the U.S. elected shit.

If you don’t understand that tweet, it’s because you’re thrown by the word “shitpost,” though you likely have a visceral sense of its import thanks to the prefix “shit,” which connotes “bullshit,” the type of empty nonsense that—per philosopher Harry G. Frankfurt’s seminal essay “On Bullshit”—constitutes “a greater enemy of the truth than lies.” A “post” is literally anything put online: a photo or Tinder screed, a YouTube clip or alt-right propaganda meme. In the sense that a grand majority of these posts are shit, we consider them “shitposts,” the result of “shitposting.” President Trump is, indeed, the perfect avatar of this only half-digital phenomenon. Ever uninformed and at pains to sound in cool command of the subject at hand, he offers an indecipherable casserole of the dozen nouns and four adjectives he can recall at any given moment. It’s the same brand of shit shoveled by his supporters onto Twitter, Reddit, and Facebook, many of them openly prizing his toxic indifference above his actual principles (such as they aren’t). This cynical pursuit of mayhem and disregard for consequence is a crucial aspect of shitposting; a shitpost is its own raison d’être, an island of trash for nobody.

While Urban Dictionary’s top definition of “shitposting” harks back to the term’s origins in the waning days of Web 1.0 (it first gained traction in mid-2007 thanks to the cliquey message forums Something Awful and Penny Arcade, where users dutifully clogged up threads with junk content of no clear value), I prefer the one above, which is simpler and more durable. It also splits the difference on the matter of intent, i.e., a shitposter consciously or obliviously shitposting. It’s evident to me, at least, that a lot of the shit on the internet is created deliberately, and a lot derives from pathetically misguided intentions. The shit commingles well. I would certainly argue that complaints about “shitposts” are, in themselves, horrible shitposts. Shitposting has been a recognizable activity for about a decade, which is exactly how long we’ve all been expected to voice our shitty opinions for a mass audience whenever we’re online. Whether your cousin comments that “Blue Lives Matter” on your Facebook status or you stumble across 4chan jokes about how cartoon character Pepe the Frog orchestrated 9/11—that is to say, whether or not the shit you see was posted in earnest or as part of an “ironic,” anarchic subculture that’s happily eating its own shit already—the shitposts multiply, representing every imaginable idiocy. If a shitpost doesn’t yet exist, it’s necessary that some asshole write it.

Which is what makes the notion of the shitpost as a medium akin to outsider art so unsettling. I once categorized shitposts as web debris of “aggressively… trollishly poor quality,” marked by hack inside jokes, lazy Photoshopping, copy-paste plagiarism, affected confusion, and ignorance. A project like ShitpostBot 5000—an algorithm that splices together user input to generate a passable shitpost, which by its very nature need not be polished, significant, or relevant—exposes the dissociative formula of the genre: Just combine two or more things that previously existed on the internet in such a way as to elicit either annoyance or amusement, and occasionally both. That we tend to conflate the two conditions is fun to lose sleep over. 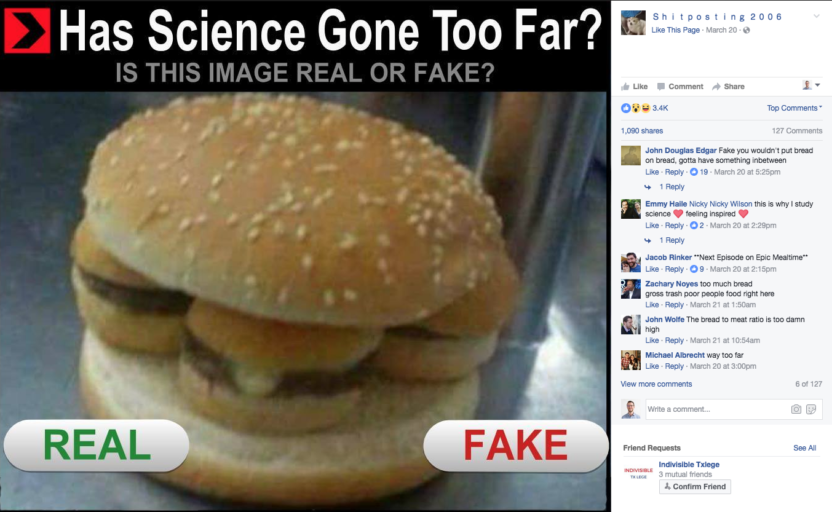 Shitposts are produced at irrational rates, and I use the passive voice intentionally, as shitposts wing into existence through no true effort but that dull minimum required to say something stupid on social media or screenshot someone else’s shitty remark. The manufacturing of shitposts is, in fact, the sharing of shit, of turning it viral and inflicting it upon everyone else. It is the pestilent communication of sheer attention to ephemera that ought to give us pause. If we do not happen to witness the worst of the internet, anonymous antagonists bring it to us. There’s room for hope, however. Now that shitposting has become a brand; now that it’s a matter of filtering your shitposts through other cultural aesthetics like Seinfeld or SpongeBob SquarePants or The Sopranos; now that the most powerful narcissist on Earth has delegated the drafting of shitposts called “executive orders,” perhaps we will begin to understand that there is no rhetoric without reaction, no shit without a beshittening.

Why do we revel in this extra layer of internet shit when we encounter too much shit in the real world? The worry is that we wouldn’t be able to process emotion and identity in its absence. I have to believe, nonetheless, that we are not our shitposts—that the shit is here for us to rise above and leave behind. That is the story of human progress. Again and again, we are pulled down into the shit that we think helps us cope or pass the time, realizing too late in its dark, soft, shitty depths that this is a kind of drowning. But the shit doesn’t rule us, and it cannot contain us. Each shitpost is also the promise of redemption. They are notes from an underground movement that yearns for purpose. These voices are noise and violence, but one day they may be in harmony.