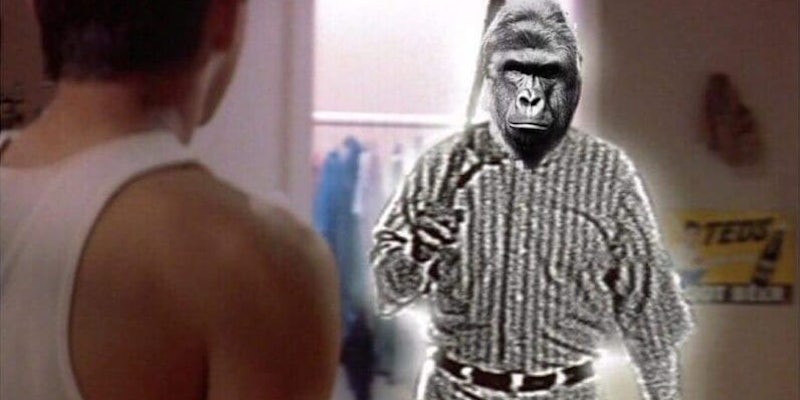 In the wake of his tragic death, Harambe became a singular, iconic internet meme, the likes of which we may never see again.

It’s been one year since Harambe, a 17-year-old male gorilla at the Cincinnati Zoo, was fatally shot in the head after a 4-year-old boy fell into his enclosure. Harambe was a beautiful ape, beloved by locals and zoo staff, but after his death, he became something else: a singular, iconic internet meme the likes of which we may never see again.

The tragic story of Harambe’s death was a perfect outrage magnet that arrived in the midst of an interminable election cycle. In May 2016, America was ready to talk about anything but Donald Trump and Hillary Clinton for a change. And in Harambe, we had a moral dilemma with an innocent victim and no good solution.

Once the boy was in the gorilla’s pen, there could be no happy ending, but Harambe’s sad death had us searching for one anyway. We questioned the boy’s parents, we questioned the zoo’s procedures, and we questioned the existence of zoos in general. In the end, the zoo’s terrible choice to kill Harambe was the only one open to them.

There was no way to restore Harambe’s physical existence, so the internet decided he would live on in another way: as a previously unseen combination of jokey meme and venerated deity.

Pledging allegiance to Harambe, and performatively mourning him, became a kind of game. Dropping his name online was an in-joke that could mark someone as part of the meme community. And if you joke about something enough, you eventually make it true. Some people ended up feeling a real reverence for Harambe and a real sadness over the death of an ape they’d never heard of until he was killed.

“I think the idea of a gorilla being a freedom symbol [appealed to people] in a way,” Brandon “sexualjumanji” Zaboklicki, the creator of the catchphrase “Dicks Out for Harambe” said in a December 2016 interview with Cosmopolitan. “I mean, in the current state of the world, people are always looking for that one thing to rally around, and it’s really easy to rally around a gorilla because you can’t look up a gorilla’s internet history.”

Nearly every part of the internet engaged with Harambe. For some, making Harambe memes was a way of coping with the real sadness of his death. For others, it was an opportunity for trolling, a way to get a rise out of the genuine mourners.

Whenever an event strikes an emotional chord with the public, the dark underbelly of the internet—sometimes called “edgelords” or “the Chanterculture” or “teens on Reddit”—is there to exploit it. No horrible tragedy is exempt from mockery. You can blame this pattern on a teenage lack of empathy, and that would be partly correct. Making memes about touchy subjects like “the ape who died” also provides a sense of community for teenage edgelords, a way to “ironically” express emotions they probably wouldn’t admit they feel.

Weird Twitter also had a field day with Harambe, particularly with the game of writing parody song lyrics about his death. It was a dazzling display of comedy one-upmanship, and a fitting tribute to Harambe in its own, strange way.

The other thing that made Harambe special was who wasn’t participating in the meme: brands.

A good meme can die off before its time if it becomes commercialized and exploited for marketing, and companies are faster than ever at co-opting meme culture. They couldn’t co-opt Harambe, though, because of the public’s strong feelings about his demise. On the meme internet, making fun of death is an acceptable, even necessary, facet of the culture. In marketing, it’s a third rail, which meant the Harambe meme would never end with a promoted tweet from Pizza Hut.

As popular as it was, though, the Harambe meme’s universal appeal wasn’t fully appreciated in its own time. With Donald Trump’s election looming, the meme internet was becoming more politically divided. Meme-makers began to huddle in internet communities and subreddits that reinforced their own beliefs. Pepe the Frog, an everyman character who had been one of the few universally acceptable memes, was enlisted by the Trumpist right for its internet propaganda war.

In that context, the apolitical, broadly appealing Harambe meme looks like an artifact from a more innocent time.  Today’s memes tend to be politicized, carrying a pro- or anti-Trump bent, which means they have little chance of becoming everything to everyone, as Harambe was. (Perhaps the closest we’ve seen this year is Salt Bae, but no one feel he’s as potent and dank a meme as Harambe was.)

Harambe, the meme, became passé in late 2016. People were eager to leave the year behind after the painful election cycle and all the notable celebrity deaths, so Harambe got left behind, too. Now he’s mainly referenced as a benchmark that new memes struggle to live up to. There’s a consensus opinion on the meme internet that 2017 has yet to find its Harambe, and there’s a distinct current of doubt that it ever will.

Harambe was an original, and we may never see his like again. Rest in peace, sweet internet ape.