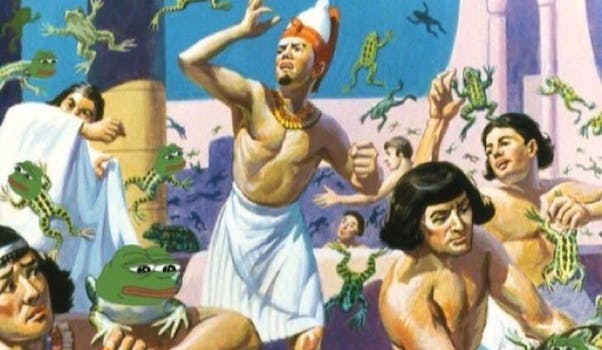 In the battle for the soul of Pepe the Frog, whose portrayals range from fun-loving webcomic character to actual Nazi, Trump supporters aren’t giving up. With the election now upon us, the alt-right is re-upping its claim on the character by posting a flood of pro-Trump Pepes. They’re calling it a #RainOfFrogs.

It’s not clear how they plan to win over undecided voters by posting gun-toting frogs, but whatever. Trump memes are often less about Trump and more about memes, about people who feel disenfranchised (even though they’re mostly young, white, and male) finding a community of fellow-trolls to which they can belong.

Hence, #RainOfFrogs. It’s named after a Biblical plague inflicted on Egyptian slaveholders, but this time it’s with… a racist cartoon? Look, the metaphor’s not perfect, but team Trump will try anything at this point, even if that means entrusting their hopes to “meme magic.”

The “Rain of Frogs” meme seems to be especially targeted at interim DNC Chair Donna Brazile, whose recent ouster from CNN caused glee among this lot. Every new Clinton email scandal that bubbles up is seen as evidence that the metaphorical “rain of frogs” is underway, drowning the Trump fans’ hated enemy.

Although the rain of frogs is ostensibly about politics, it’s more about meme culture and the casual racism of Reddit’s r/TheDonald and 4chan’s /pol/. Various trolls are describing the campaign as a wizard battle between “Kek the frog god of meme magic” and “Moloch the elite god of the turbokikes.”

We come to it at last.
The great battle of our time. #Kek #PepeTheFrog #Moloch #SpiritCooking #MAGA #ClintonBodyCount #Elections2016 pic.twitter.com/mqzvpFtyYn

The ancient prophecy of #Kek is upon us.

In other words, they’re doing it to be edgy and have a laugh. But sometimes it’s hard to find a difference between trolling to get a reaction and a genuine belief in white supremacy. Some of these memes are horrifying in their naked racial animosity:

None of this makes a damn bit of sense, which is why it’s fortunate that the presidency is determined not by Moloch, Kek, or “meme magic,” but by a completely different and equally arcane system: the electoral college.

No matter what side of this interminable campaign you’re on, we can all be grateful there’s only one day of it left.