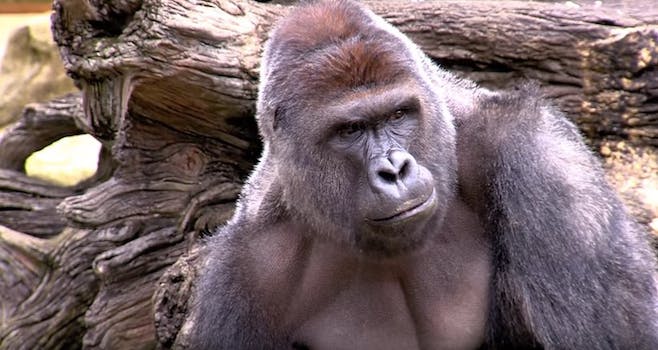 The ape and the meme are two different Harambes.

In life, Harambe was a regular gorilla, but since his tragic death, he’s been elevated to the status of some sort of internet ape-god. He’s everywhere, and performative grief over his death has become a meme. This memeification has been difficult to swallow for the Cincinnati Zoo, where employees knew and loved the real Harambe.

“We are not amused by the memes, petitions and signs about Harambe,” Cincinnati Zoo director Thayne Maynard said in a statement to the AP. “Our zoo family is still healing, and the constant mention of Harambe makes moving forward more difficult for us. We are honoring Harambe by redoubling our gorilla conservation efforts and encouraging others to join us.”

Ignoring the ubiquitous Harambe memes is especially difficult considering that the zoo has been hit with a flurry of Harambe-themed petitions and tweets. Maynard’s Twitter account was even hacked by a Harambe-loving prankster. Life as the Cincinnati Zoo’s social media person must truly suck right now.

But, if it’s any comfort to them, the internet meme-deity that is Harambe really has very little to do with the actual gorilla.

Meme-Harambe exists in part because of the tragic choice the zoo was forced to make after a small child fell into Harambe’s enclosure, a way to cope with the sad end to a senseless situation where every available option was bad. But now that he’s here, he’s just like Pepe the Frog, Dat Boi, or Spongebob. He’s whatever people want him to be—the president, a Pokémon, even a racist slur against black celebrities.

The earthly Harambe was none of these things, and the people memeing him know it. Harambe the character has been dissociated from the gorilla the zoo staff knew and loved. Only in rare cases, like the discovery of Harambe’s baby photos, do the real Harambe and internet Harambe meet. It’s time like those when even an inveterate shitlord might feel some genuine sorrow over what fate befell Harambe in the actual world.

Of course, there’s some genuine cruelty in some of these Harambe memes. It’s a sad and shitty part of the internet, but the only recourse is to wait until the storm passes and the assholes lose interest.

True assholes are a tiny minority in the Harambe meme movement, though. It’s mostly teens hanging out on Facebook meme pages who want to feel like they’re part of something (and haven’t realized that the meme is over, despite tattoo evidence to the contrary).