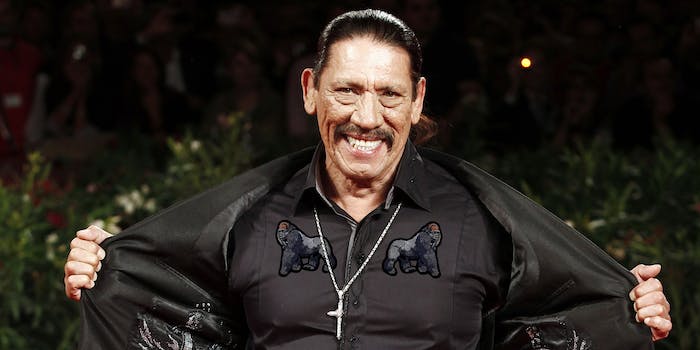 ‘D**ks out for Harambe’ is a movement Danny Trejo supports

This is just the tip of Harambe advocacy.

Harambe has shuffled off this mortal coil and morphed into an unlikely meme the world over.

The endangered silverback gorilla, who was fatally shot at the Cincinnati Zoo after a child had entered its enclosure, inspired heaps of hot takes and calls to action in the days following his death. He further inspired an entire country—not a few voting Australians wrote in the animal as their choice for the next prime minister.

Now, Harambe’s death has prompted a social movement that has reached even Hollywood’s elite stars and activists. Comedian Brandon Wardell and an impassioned Danny Trejo present: “dicks out for Harambe.”

Only July 2, Twitter user and Harambe activist @sexualjumanji tweeted this aggressive missive advocating for the vindication of the gorilla with a mixture of firepower and dicks:

As an added plot twist, it turns out that @sexualjumanji was piggybacking off of a fellow Harambe activist chatting with him on Twitch. @sexualjumanji was live-streaming a memorial for the fallen gorilla when Gabe (aka @weebriel) typed out the phrase that would alter animal rights advocacy for decades to come.

FOUND THE GUY WHO FIRST SAID IT OMG https://t.co/HDifrvydeK

Wardell dropped the gun associated with @sexualjumanji’s initial tweet and sprang into action, tweeting the more concise “dicks out for Harambe” on Independence Day. Forget the potential for this to be a case of joke theft gone viral. Advocacy for Harambe apparently also transcends accountability.

In between chanting and pouring one out for Harambe, Wardell caught the attention of Trejo, who has long been involved in animal rights advocacy. It’s only appropriate that the Machete star respond in kind and be willing to lend his voice to such a worthy cause.

Trejo took to the Upright Citizens Brigade stage shortly after his vocal support of “dicks out for Harambe.” Naturally, he discussed this meaningful social movement, which is just the tip of the widespread support Harambe has seen since his plight from the afterlife gained international attention.

All that’s missing is full-blown action in the form of someone’s dick leaving their pants, going public, and avenging the beloved gorilla, who was gone too soon.

Update 4:42pm CT July 7: This piece has been updated to correct the zoo location as well as attribute the originator of the “dicks out for Harambe” phrase.