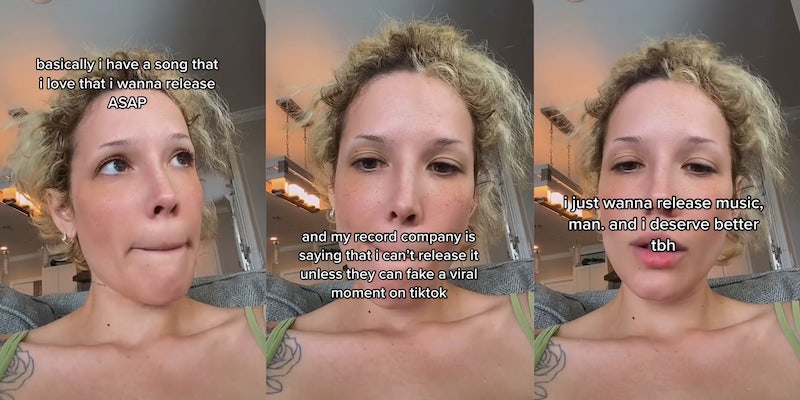 ‘They are doing this to basically every artist these days’: Halsey exposes record label for asking them to create a ‘fake viral moment on TikTok’ before releasing music

Halsey appeared to release a private conversation about her new song's PR strategy.

The pressure to create music that goes viral on TikTok is so intense that even A-list artists are calling it out. In a TikTok posted on Sunday, Halsey complained that her record label wouldn’t let her release a song unless they can “fake a viral moment” on the app.

“Basically i have a song that i love that i wanna release ASAP,” they wrote. “But my record label won’t let me. ive been in this industry 8 years and ive sold over 165 million records. and my record company is saying that i can’t release it unless they can fake a viral moment on tiktok.”

“Everything is marketing. and they are doing this to basically every artist these days. i just wanna release music, man. i deserve better tbh. i’m tired,” they continued.

Over the past few years, plenty of songs have charted as a result of TikTok virality, whether that’s new releases like “Say So” by Doja Cat, or old tracks that unexpectedly became a meme, like “Dreams” by Fleetwood Mac. Record labels inevitably tried to capitalize on this tactic, with TikTok stars like Bella Poarch getting music deals. Meanwhile, music fans are growing more suspicious of potential industry plants on the app.

For instance, the viral track “ABCDFU” was accused of benefiting from engineered virality (something the artist’s record label denies), and, last year, a band named the Tramp Stamps was widely mocked for appearing to court TikTok fame with a faux-punk aesthetic.

Halsey’s complaints speak to a sense of frustration among artists who want to follow a more traditional route instead of relying on TikTok, especially if it involves faking a viral response. In a follow-up video, Halsey appears to expose a private conversation about her new song’s PR strategy.

A person off-camera talks about putting the new track’s artwork on TikTok, while Halsey looks frustrated and noncommittal. “I just hate this,” they say eventually.

A few hours later on Twitter, Halsey wrote, “Talked to my label tonight after my tiktok tantrum. They said ‘wow the tiktok is going really strong!’ I was like ok cool so can I release my song now? They said “we’ll see!” tell me again how I’m making this up.”

Explaining that the song’s video was already filmed, Halsey added, “I’m way too established to stir something like this up for no reason or resort to this as a marketing tactic but now I’m in too deep so there’s no going back.”

Obviously, there’s a certain irony to Halsey going semi-viral by complaining about the pressure to go viral, but they’re certainly not alone. Reposting Halsey’s original TikTok on Twitter, a fan highlighted other artists who had shared similar sentiments about being pressured to use TikTok, including Florence Welch and Tokio Hotel.

Update 6:15am CT, May 24: When reached for comment, a Capitol Music Group spokesperson told the Daily Dot in a statement: “Our belief in Halsey as a singular and important artist is total and unwavering. We can’t wait for the world to hear their brilliant new music.”

The Daily Dot has reached out to Halsey’s record label Astralwerks and its parent company Universal Music for comment.