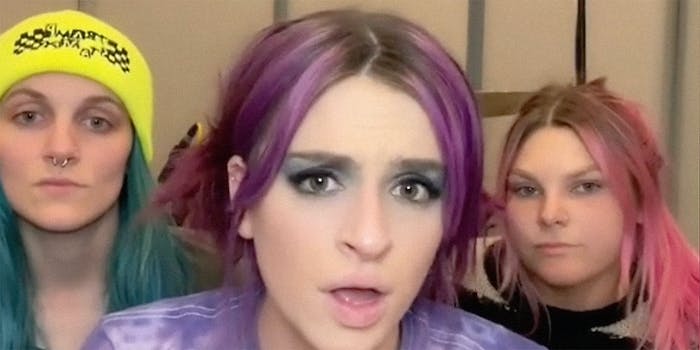 Is Tramp Stamps a real band? And is Dr. Luke involved?

The trio became a target on TikTok this week, after the release of single “I’d Rather Die.” While the audio has apparently been removed from TikTok, the chorus of the song—”I’d rather die/Than hook up with another straight white guy”—raised eyebrows and there were suggestions that Tramp Stamps are a manufactured product or “industry plant,” despite its alleged DIY aesthetic.

The group—singer Marisa Maino, guitarist Caroline Baker, and drummer Paige Blue—has been on TikTok since November. A video from that same month claims the band originated when “3 girls got drunk at a bar and wrote a song.” Tramp Stamps covered Weezer, Paramore, and Blink-182, and its “original” songs mimic a very specific early aughts pop-punk aesthetic.

More cringeworthy are TikToks in which the band attempts to vaguely align itself with feminism. On Tramp Stamps’ website is a startling quote allegedly from Baker, saying that the content of the band’s music is “the kind of stuff women talk about all the time with their friends, but no one’s ever put it to this kind of music before.”

Reddit sleuths found that both Maino and Baker signed publishing deals as solo artists with Prescription Songs, owned by Lukasz Gottwald, aka Dr. Luke. Gottwald was sued by Kesha in 2014 for sexual assault, leaving her in contract limbo for years. His potential involvement raised red flags, though he’s recently produced Doja Cat and Kim Petras, who both found viral success on TikTok.

According to YouTube, Tramp Stamps’ music is licensed through Kobalt Music Group, of which Gottwald is part owner, though Make Tampons Free appears in much of their social media. A trademark for Make Tampons Free was filed in August 2020 and is listed to an address for a Nashville-based entertainment business management company.

Three solo artists (drummer Blue is also a songwriter) being marketed as a group is nothing new, but TikTokers were more focused on how “obvious” and outdated the the ploy is, considering Gen Z appears to be the target market.

In Tramp Stamps’ most recent TikTok, Maino addresses a comment about her “wish I was a lesbian energy” with “Hi, I’m gay.” There are also allegations that a stan account, created just last month, is actually the band or someone associated with it. A post from Thursday that edited Tramp Stamps into an image from the Stonewall uprising was not well-received.

The comments on Tramp Stamps’ TikTok and YouTube are currently turned off. We’ve reached out for comment.