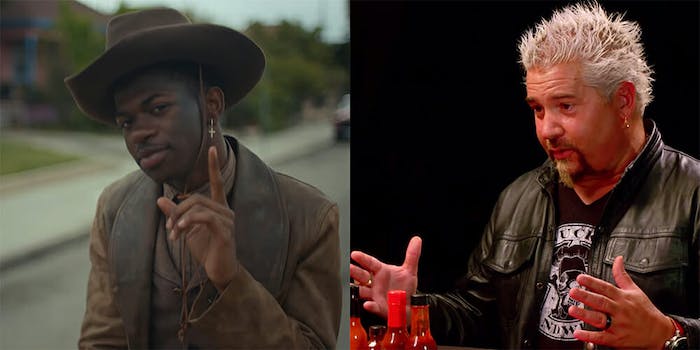 All roads lead to Flavortown.

Unprompted, Thursday evening Fieri tweeted out photoshopped artwork of “Old Town Road” featuring himself riding one of the horses in the single art and asking if it was too late to hop on a remix. Lil Nas X quickly took note and assured Fieri that the opportunity was indeed still open.

“it’s never too late for u legend,” Lil Nas X wrote back.

it’s never too late for u legend https://t.co/oqTlRvf9zt

Afterward, Fieri replied with his take on the cover art for “Panini,” an unreleased track that Lil Nas X has teased snippets of before.

Maybe we should drop Panini before we take a trip to Flavortown @LilNasX? https://t.co/Lu2nMS8Rmt pic.twitter.com/85fXX51aWx

In addition to the Billy Ray Cyrus remix which propelled “Old Town Road” back onto the Billboard charts, a Fieri feature would really add to the song’s already impressive resume.

Apparently, the crossover appeal for Fieri and Lil Nas X is a lot higher than you’d expect as fans of both figures showed their support of the collab through memes and possible lyrics.

Eating on a horse, ha
Spicy like a torch
Eatin hidden valley
Tryna lower all that scorch, now

I'm gonna take my ass to the old diner

And yes, Lil Nas X is self-aware of the fact that he’s known entirely for his hit single.

me when my label tells me i have to release songs other than new versions of old town road pic.twitter.com/9joAZRh9kB

However, that soon might change. Wednesday, Lil Nas X posted a cryptic tweet only containing today’s date, June 7. He immediately followed up with another tweet saying that this was not a release date.