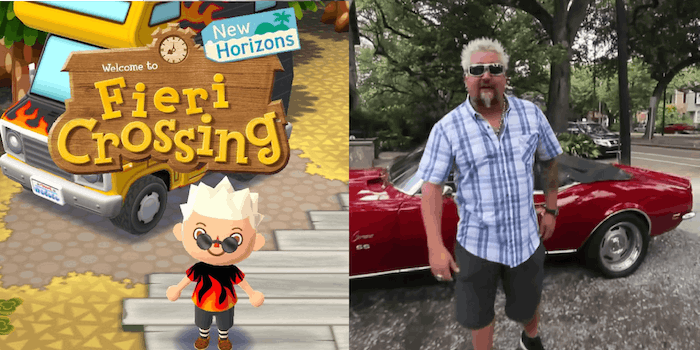 Mayor of ‘Flavortown’ Guy Fieri has landed in Animal Crossing

Fieri created a 'Flavortown Island' and is ready to check out 'local joints.'

Stop everything, the mayor of “Flavortown” has joined Animal Crossing.

Restaurateur and flame enthusiast Guy Fieri announced Monday via Twitter that he set up his very own island in Animal Crossing.

“I’m here on Flavortown Island checkin’ out a joint run by local legend, Tom Nook! Unlike the homes around here, you won’t have to take out a loan to afford these dishes,” Fieri wrote in a nod toward the Food Network show he hosts, Diners, Drive-Ins and Dives.

Animal Crossing: New Horizons, one of the indisputable heroes of the coronavirus-induced quarantine, is the latest installment of the Nintendo game that launched late March. The game allows users to create their own island, get into stupid amounts of debt to the one and only Tom Nook, and socialize in the time of social distancing.

Now, users are scrambling to find a way to get Fieri to friend them on the game so they can score an invite to the one and only Flavortown island.

“I don’t have this game or the switch but now I want to for Guy Fieri,” Twitter user @NIC0DEGALLO wrote.

One begged Fieri to “please come to my island.”

“How did Guy Fieri become such a gem in these dark times? Doesn’t matter, I’m loving it,” another wrote.

And just like that, it looks like Guy Fieri continues to be the internet’s favorite eccentric uncle.