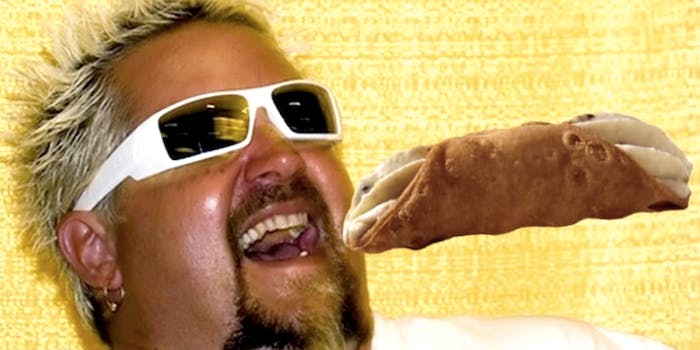 Guy Fieri’s show gets a NSFW redub courtesy of YouTube

Bad Lip Reading reigns supreme in the genre, but Jaboody Dubs trades accuracy for a more cogent (if disgusting) storyline.

Overdubbing the audio track to a popular video has gone from frat house fun to a new art form, with styles ranging from pure grossout to comedic genius.

With Bad Lip Reading reigning supreme in this genre, we find Jaboody Dubs somewhat closer to the hilariously juvenile part of the scale with this over-the-top riff on Food Network’s Guy Fieri. With his goofy signature phrases such as “welcome to Flavortown,” faux surfer spiky hairdo, and wannabe Vanilla Ice bling, Fieri is a sitting duck and favorite target for mockery across multiple media.

The Jaboody crew pulls out all the stops with a nothing-is-sacred sendup of Fieri’s signature show. The menu includes bathroom humor (quite a bit, actually), disgustingly funny sound effects, unabashed swearing, and lots and lots of insults. Truth be told, though, the food (especially the cannoli) still looks pretty good.

This is far from the first time Fieri’s been the subject of social media mockery. In 2013, TMZ got its hands on a clip in which Fieri had a knock-down, drag-out fight with his hairdresser in a car. In 2012, crowdsourced reviews, as well as a dagger to the heart from The New York Times, threw Guy’s Times Square restaurant under the culinary bus.

Knock him all you want. Fieri has gone from winning the second season of Next Food Network Star to being the host of Diners, Drive-Ins, and Dives—one of the most popular food shows on television—to game show host. And considering he’s worth $16 million, Guy’s the one laughing all the way to the bank.