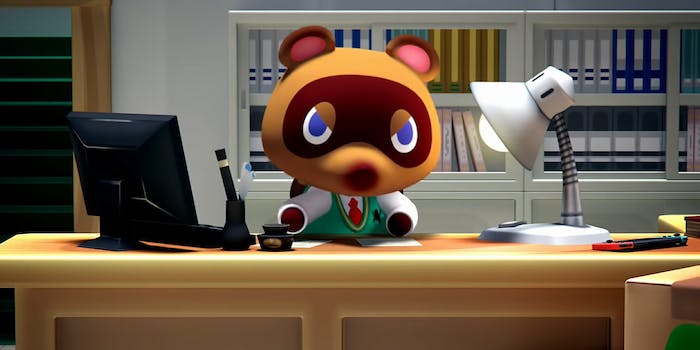 The animals are back in town.

It finally happened. During Thursday’s Nintendo Direct presentation, the publisher delivered an announcement for something fans have been clamoring for: a Nintendo Switch iteration of Animal Crossing. It’s real! Your gaming prayers have been answered.

Shake a tree in excitement! A new mainline game in the Animal Crossing series is slated for a 2019 release exclusively on #NintendoSwitch. pic.twitter.com/iVA5QSV359

Yes, it’s hard to believe, but this isn’t a joke. Soon you’ll be able to catch bugs, go fishing, and make more animal friends than you can shake a stick at—all on the Switch.

If you’ve never played, Animal Crossing is a fun, welcoming life simulation game where you move to a town inhabited solely by animals. Cats, porcupines, dogs, bears, owls—you name it, you might see it. You get your own humble abode to furnish with special accessories while you mingle with townies and earn money. It’s extremely chill and very easy to while away hours in.

There wasn’t much information about the Switch version of the game except that Nintendo is targeting a 2019 release. The new “mainline” series entry is being called its working title for now, Animal Crossing for Nintendo Switch, and is the first core game in the series since 2013 (save for the mobile-only Animal Crossing: Pocket Camp that debuted in 2017).

Fans have been on pins and needles waiting for Nintendo to finally drop the news for years, so naturally social media lit up with excitement. Yes, there were some other awesome announcements on Thursday. But ANIMAL CROSSING, THOUGH.

I HAVE WAITED SO LONG pic.twitter.com/cio4rPuQZs

IM SO HAPPY OMG I LOVE THIS NEWS pic.twitter.com/6C2QE4k4u4

The way Nintendo delivered the news was perfect, too. After trolling fans and then getting their hopes up by introducing fan-favorite Isabelle as a new fighter for the upcoming Super Smash Bros. Ultimate, it looked like the Nintendo Direct was over. But then, something amazing happened. A short clip began playing of the lovable scamp Tom Nook watching Super Smash Bros. Ultimate trailers on his computer.

The big reveal came shortly after that, and people had some hilarious reactions to Tom Nook sitting at his desk while speaking to the audience. (In the game, you’re typically indebted to the character for a while as he makes upgrades to your home in-game and charges you a ridiculous amount of in-game currency, or “bells,” to do it with.)

Memes of Tom Nook behind his computer took off.

Why does Tom Nook look like he’s about to demand more pictures of the Spider-Man #NintendoDirect pic.twitter.com/9YfPW0MHDh

It’s going to be a long wait until Animal Crossing for Switch finally debuts, but hopefully memes like these will hold everyone over until it does.