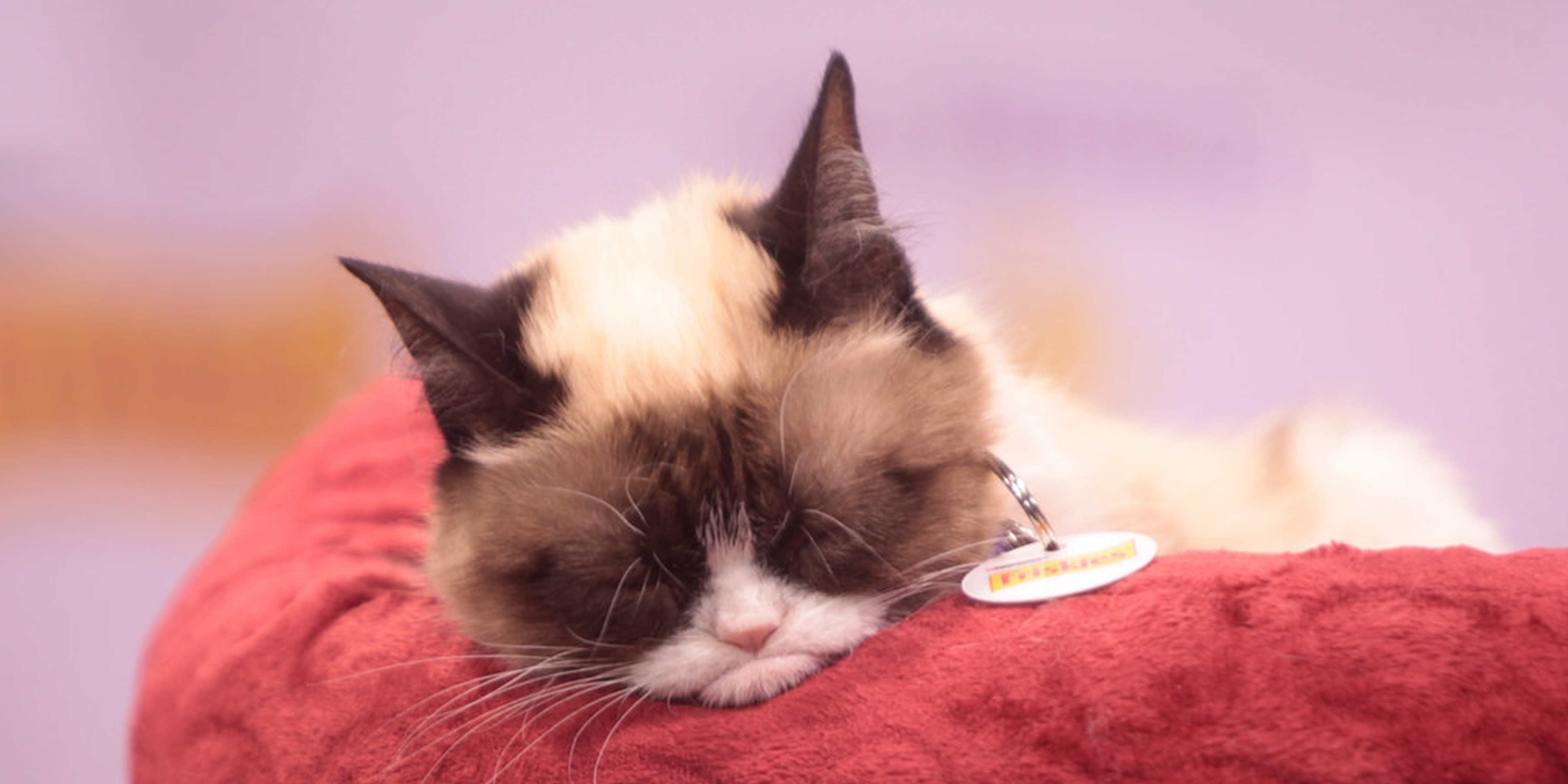 Is Grumpy Cat being exploited?

Grumpy Cat's new movie is terrible, and so are we.

This weekend, Grumpy Cat’s Worst Christmas Ever hits Lifetime, and by a number of accounts, it’s also Grumpy Cat’s Worst (and Hopefully Only) Movie Ever. That’s not entirely unexpected. Lifetime specializes in shlock, Christmas specials are tailor-made for trashy moviedom, and animal specials aren’t exactly known for their cinematic sophistication. The tide of bad reviews in advance of the film is a testimony to more than just a grumpy response to a terrible movie, though. It also seems to be what might, possibly, be the start of a backlash to the exploitation of celebrity animals.

Grumpy Cat, aka Tardar Sauce, became almost instantaneously Internet-famous when she was posted to reddit as a kitten in 2012. After the comment thread exploded, her owners realized they had a social media gold mine on their hands, and they’d better act fast; memes come and go so quickly that they have to be exploited while the iron is hot. By the end of the year, Tardar Sauce had a manager, a website, and a growing following, along with a feature film option and, eventually, a book deal. It’s perhaps not surprising that Grumpy Cat made the leap to Lifetime after a slew of celebrity appearances, an endorsement for Friskies, and guest appearances on shows like The Bachelorette.

The very fact that she needed a “meme manager” is perhaps a testimony to the Internet’s apparently insatiable appetite for animals doing weird, cute, or odd things. The stranger looking, the better, whether it’s Doge side-eye or feline dwarfism and peculiarly foreshortened legs.

Lots of cats have made the Internet circuit: Maru is famous for loving boxes, Lil Bub turns heads with her dwarfism, Hamilton the Hipster Cat is distinguished by his mustache, and the late great Colonel Meow was a Web sensation. With the right combination of crowd appeal, some of these memesters have stuck out the usual Internet fame cycle, and they’ve generated a great of money for their owners. But none so much as Grumpy Cat, who is worth nearly $94 million.

Grumpy Cat’s Worst Christmas Ever is only going to add to her net worth, but for viewers, it promises to be an absolutely excruciating experience. Reviewers warn that in addition to being terrible, with a limited plot and endless commercials and product placement, the program is so self-referential and self-deprecating that it becomes almost unbearable. Put bluntly, “The people who made Grumpy Cat’s Worst Christmas Ever don’t give a shit about quality. They phoned it in, told us they were phoning it in, and cackled all the way to the bank.”

“I am probably the target audience for this mess,” wrote Pilot Viruet at Flavorwire, “yet I had to pause and stop watching four or five times, just to mutter and express my disbelief that this exists.” The New York Times noted what may be the worst thing of all: “[A]fterward we are all going to have to face the fact that we live in a country where a large number of people spent the Saturday night of a four-day weekend watching this thing.”

But Libby Hill at The A.V. Club puts her finger on what is perhaps most disturbing about the movie, and the trends it embodies:

As painful as much of the film is to watch, there’s maybe nothing so unsettling about it as the use of its star, Tardar Sauce. Much of the film is shot in extreme close-up, the better to capture (non-)reaction shots from its stonefaced feline protagonist, while Plaza half-heartedly reports the cat’s inner monologue. In other scenes, when she is not expressly featured, you can sometimes see the cat curled up on a desk, tired.

Her comments speak not just to Grumpy Cat’s appearance in the film, but to the way she looks in many of her public appearances: Tired. While the cat’s permanently grumpy facial expression (a result of a congential medical condition) might seem to mask some of her discomfort, she’s clearly exhausted, and perhaps not entirely pleased to be trotted out, manhandled, subjected to teeming crowds, flashing cameras, and terrifying camera sets. She is, after all, a cat, not a Hollywood starlet, and she didn’t choose this particular career, though her owners seem perfectly happy to exploit her.

Is the distaste for the Grumpy Cat film about the fact that it’s indisputably bad, or does it also have something to do with the fact that the public, especially the Internet, is starting to get uncomfortable with her exploitation? She represents what one might almost consider “the end of the traditional film star,” but for a key thing: She never asked to be one in the first place.

If you have cats who deign to share their house with you, you may have observed some common overall feline traits: Cats generally like to keep to themselves, they prefer to stay at home, they dislike strangers, and they don’t appreciate loud noises, flashing lights, and other unexpected stimuli. By and large, they prefer to sleep for the bulk of the time, except when they are permitting you to pet them. There are, of course, exceptions to the rule, and perhaps Grumpy Cat is one of them, but even if she is, the extreme nature of her public appearances seems excessive, even for a people-friendly, attention-loving cat who adores travel.

She’s appeared on a slew of television shows, including Good Morning America, American Idol, and CBS Evening News. She’s been on the radio at the Minnesota State Fair. She’s made commercials for both Friskies and Honey Nut Cheerios, and appeared at locations including Book Expo America (an industry event with some 30,000 attendees) and several bookstores in Southern California to promote her book. Co-branded merchandise rakes in millions for her owners.

Now, in the promotional tour for her Christmas special, she’s criss-crossing the country; recently, for example, she showed up at Macy’s San Francisco for the unveiling of their Christmas windows. In most of the images from the event, she looks exhausted and stressed.

She’s also made appearances at SXSW, in both 2013 and 2014. In her 2013 appearance, she sparked a controversy and, inevitably, a #FreeGrumpyCat hashtag as members of the public wondered whether she really belonged in the Mashable tent like some kind of promotional item. “I’m not cool with it,” wrote Mike Isaac at All Things D. “If I were a grumpy cat, the absolute last place I’d want to be is stuck in the middle of a 24-hour party for days on end, where throngs of drunk partygoers waited for a chance to take a picture with me.”

In 2014, she showed up to take a seat on the Iron Throne and sparked the ire of Dr. V, a veterinarian who wondered if Grumpy Cat was really so happy about yet another public appearance. “If you’re going to exploit your cat’s genetic defect for millions of dollars, I’m not going to stop you, but at least be honest enough to say yes, this is what I’m doing,” she wrote.

Because you can swear this is to the cat’s benefit all you want, but truth of the matter is I can’t think of a single feline I’ve met in my lifetime who would enjoy getting passed around to strangers while on a boat ride. Come on. This does not require an advanced degree to know. It simply involves having met any cat.

Jen Carlson at Gothamist makes a good point when she asks whether it’s really humane to bring an animal on a publicity tour. Using famous box-lover Maru as an example, she says: “Let’s turn to one of the most famous Internet cats, Maru. Maru has a fiercely protective human, and sources tell us that cat has turned down plenty of publicity opportunities, even those that would have allowed the cat to remain at home. And we can’t think of one good reason to not follow Maru’s lead—so keep your pets at home.”

Gigaom’s Liz Shannon Miller also uses Maru as an example in a piece where she expresses her unease with the exploitation of celebrity animals. “Maybe it’s worth remembering the real charm of cat videos: The opportunity to see cats being cats,” Miller writes. “Maru, for a long time held up as the Internet’s most famous cat, has held onto this fame without ever changing the established format that brings him to the world: Short videos, shot and edited together by an unseen, unnamed owner, that highlight Maru behaving as housecats do in their natural habitat.”

In her A.V. Club piece, Libby Hill thinks that the problem isn’t that we want to see Grumpy Cat behaving like herself. It’s that we want her to be like us. “She’s just a cat—a cat that people think they know the inner thoughts of, creating amusement at it being just like people,” Hill writes. “She’s dressed up and carried around throughout the film like an inanimate prop, and when she’s not being bounced around in front of a green screen, she rests on a cushion, occasionally not even lifting her head while the narrative swirls around her, paying no mind, like a stone overtaken by the stream. Tardar Sauce, or Grumpy Cat, is just a cat. She’s a creature that deserves better than crass commercialization and stark exploitation. She’s not the Internet’s property. She’s not Lifetime’s property. She’s not mean or sassy or snide. She’s a cat.”

Grumpy Cat is perhaps the most gross example of a meme gone out of control, and an animal turned into a commodity rather than a living being who might prefer to remain at home. Her owners insist that they aren’t exploiting her and that she’s very well cared for when on the road, but that claim rings hollow when Grumpy Cat turns up again and again in the media, looking not just grumpy, but deeply sad. That fatigue, paired with sheer awfulness, may be what’s turning so many people off the Grumpy Cat Christmas special.