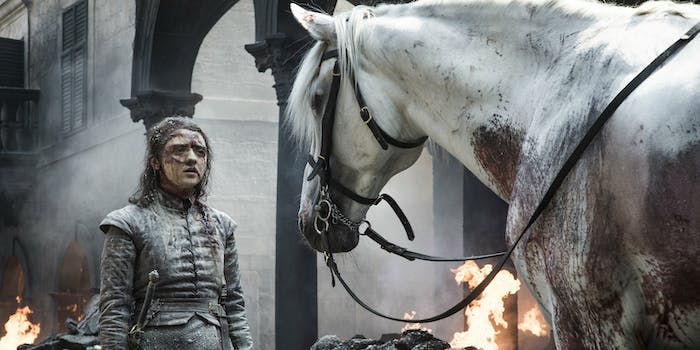 The penultimate episode of Game of Thrones was a doozy.

After seven and a half seasons of waiting, the battle between Cersei Lannister and Daenerys Targaryen began—and ended—in fire. Once the smoke cleared, fans were mostly dismayed at the violence unleashed on the innocents of King’s Landing.

When the destruction ceased, a mostly unharmed Arya was left standing. In a moment dripping with symbolism, a pale white horse approached her through the haze. The episode ended with a lone Arya riding her unexpected savior out of the ruins. While the shot was beautiful—albeit convenient—many fans were reminded of the speed with which an Uber shows up after a hard night of partying.

“Bran sent a horse uber to save Arya and some of y’all think he’s useless,” one user wrote. “That’s more than what Jon did the entire season.”

And death rode in on a pale horse #Arya #GameOfThrones pic.twitter.com/OhHA5ZGmUn

Pale horse waiting for things to calm down so it can pick Arya up #GameofThrones pic.twitter.com/6lndBRPAeP

Bran sent a horse uber to save Arya and some of y’all think he’s useless. That’s more than what Jon did the entire season. #GameOfThrones pic.twitter.com/Mcdi14SsBB

decent episode tbh but idk how i feel about the product placement at the end pic.twitter.com/9hGiY36q0q

Arya: I must get out of here….

The little girl #Arya tried to save was holding a white horse#GameofThrones pic.twitter.com/rW7mPdFrqe

Thanks for choosing Uber from GameOfThronesMemes

Arya needs to take that horse to the Old Kings Road

Arya: 🎶 I got the horses in the back 🎵#GameOfThrones pic.twitter.com/FQ98AlBXYU

Some people poked fun at how long Arya’s shot with the horse lasted… in an episode that very much felt strapped for time.

“It’s the penultimate episode, we don’t have much time.”

“Got it. Five minute shot of Arya stroking a horse.”

Another thing, having the Starks react to Jon’s parentage reveal was a “waste of time” but seeing Arya pet a fucking horse for 3 minutes wasn’t?! This has to be a collective hallucination cause it’s just too ridiculous to be taken seriously #GameOfThrones

WHY WAS THE SCENE BETWEEN ARYA AND THIS DAMN BLOODY HORSE LITERALLY FIVE WHOLE MINUTES? WHO MADE THESE DECISIONS? #GameofThrones

The scene was soaked in symbolism, leaving many fans to guess as to what the writers were trying to communicate. Does the pale horse symbolize Dany’s death? Did Bran warg into the horse to save his isolated sister? Has Uber finally perfected its Westerosi expansion? Regardless of the reasoning, one of Westeros’ most capable killers is on the move. We can’t know where she’s headed until next episode, but we know she’ll get there quickly.

Need more news from beyond the Wall? Sign up hereto receive our weekly Game of Thrones newsletter from in-house expert Michelle Jaworski.