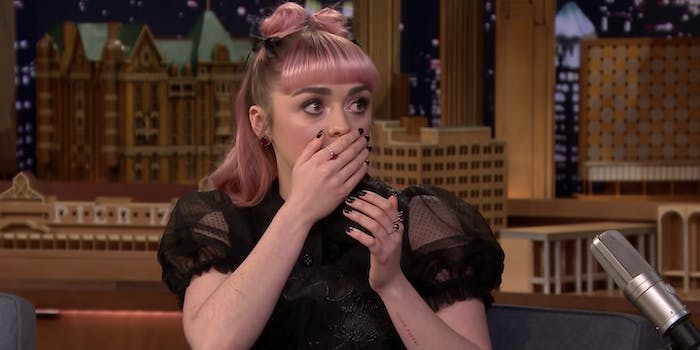 She almost had us for a moment.

Most of us can spot an April Fools’ Day prank from a mile away, but when a Game of Thrones cast member tries her hand at it, it’s enough of a potential gut punch that it’s all too easy to fall for it.

That prankster is Maisie Williams, who visited The Tonight Show Monday night and spoke to Jimmy Fallon about her time on Game of Thrones and season 8, or at least what little of it that she could. And in that process, it appeared that she revealed what episode Arya Stark would die in—with Williams realizing what she did at the exact moment the audience did.

Fallon assured her that they could edit that spoiler out, but Williams wasn’t convinced, and soon she left the stage. And we’re left to sit with what just happened long enough to think that maybe something big just happened. (Even though if Williams had actually dropped a spoiler, it would’ve just been edited out.)

Based on the trailer that we have, we know that Arya at least makes it to the big Winterfell battle against the Night King and his army, which occurs in the third episode of the season.

But for just a few moments, it’s easy enough to forget logic, how well most of these actors are at talking about a super-secretive show without actually revealing anything substantial, or even what day Williams appeared on The Tonight Show. (It’s quite important.) Because for that short period of time, Williams looked absolutely devastated at what she might’ve just done. Acting!

But let’s, for a moment, say that Williams did reveal Arya’s fate in Game of Thrones’ final season before it aired. What is HBO gonna do now, fire her?