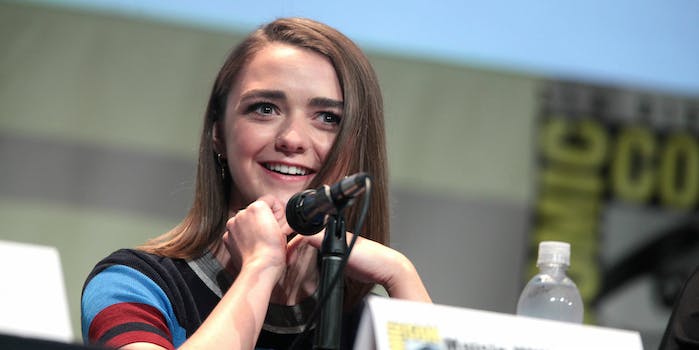 Could the actress' bloody farewell give us a crucial hint?

Game of Thrones actress Maisie Williams has grown up just as fast as the show’s meteoric rise, and now she’s saying goodbye in a heartfelt (and surprisingly bloody) Instagram post. Even better, Williams’ use of a specific hashtag may give away how the war for control of Westeros plays out.

goodbye belfast. goodbye arya. goodbye game of thrones. what a joy i’ve had. here’s to the adventures to come #lastwomanstanding #barely #immasleepforthenextfouryears #justkiddingidontsleep

“Goodbye belfast. Goodbye Arya. Goodbye Game of Thrones. What a joy I’ve had. Here’s to the adventures to come,” she wrote, adding, “#lastwomanstanding #barely #immasleepforthenextfouryears #justkiddingidontsleep.”

The first thing anyone will notice is the mysteriously bloody white tennis shoes Williams is wearing. Williams’ character Arya Stark started out as a very young, very vulnerable firebrand, often finding herself kidnapped or in the hands of unwilling wards like the Hound. Since then, she’s evolved into a cold, calculating (but still likeble) killer who’s been trained by a shadowy secret society and worked her way back to Winterfell on the edge of her blade.

It’s highly unlikely that Arya will be wearing Adidas anytime during her time in Westeros. But the fact that Williams is sporting such bloody footwear could indicate that the actress either performed so intensely that she literally suffered for her art—or someone else suffered for it.

Also of interest is Williams’ use of the “last woman standing” hashtag. The women of Westeros have always been a huge focal point throughout its many conflicts, be it Daenerys’ rise from slave to savior, Missandei’s rise from slave to the Mother of Dragons’ right-hand woman, to Sansa’s rise from sexual slave to … boy, Game of Thrones sure loves to subjugate its women.

Anyway, Arya’s journey toward becoming an assassin has been one of the most thrilling, and now that she’s joined her sister at Winterfell, she’ll clearly play a major part in the upcoming war for the throne. Could she literally be the last female character standing as the dust settles? Is she indicating she’s one of the last actors to finish shooting her scenes, or is she just messing with us?

Whatever you foresee happening, take potential spoilers with a grain of salt, as it’s long been rumored that multiple endings are being shot.