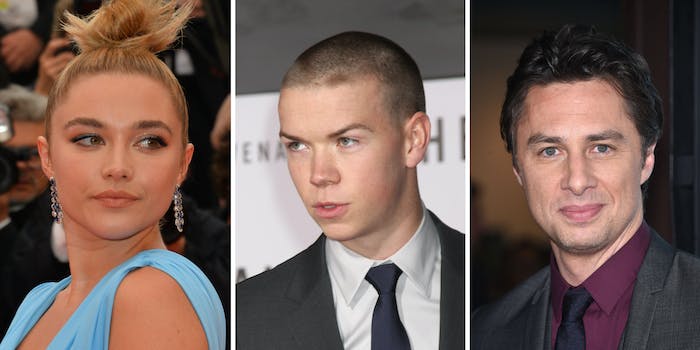 ‘Thanks for saying we look sexy.. doesn’t mean we’re doing the sexy’: Florence Pugh shuts down rumors she dumped Zach Braff for Will Poulter

Some of Pugh's fans hoped she'd dumped her older boyfriend Zach Braff, leading her to call out 'bullying' on Instagram.

Marvel star Florence Pugh was at the center of an old-school paparazzi micro-scandal this week, after photos went viral showing her at the beach in Ibiza with actor Will Poulter.

This led some fans to believe she’d either dumped her boyfriend Zach Braff for Poulter—or was publicly cheating on him. But she was quick to debunk those rumors on her Instagram Story, explaining, “No, Will Poulter and I are not dating.”

“We went to the beach with our friends, who are always about half a metre away from us in every picture, but have been cleverly cut out/framed out so that it looks otherwise. You can LITERALLY see my best friend in the corner of so many shots and Archie’s arms at the sides,” she said, referring to Pugh and Poulter’s Midsommar co-star Archie Madekwe.

Accusing the paparazzi of “fabricating” a scandal that didn’t actually exist, she added, “Thanks for saying we look sexy.. doesn’t mean we’re doing the sexy.” In another Instagram slide, she joked that she was “GOBSMACKED” the paparazzi didn’t catch her nipple popping out of her top while she was snuggling with her best friend.

The main reason these photos took off in the first place is because a lot of people are heavily invested in Pugh’s relationship with Braff—and not in a good way. The couple have officially been dating since 2020, but since Braff is 47 and Pugh is 26, their age-gap raised some eyebrows. She’s defended her relationship from this backlash in the past, emphasizing to her fans that she’s an adult who can make her own choices.

But when the Poulter beach photos spread on Twitter, they inspired a slew of tweets in which fans expressed hopes that she’d dumped Braff, describing the older actor as a “fossil man,” “expired,” and an “old ass bf.”

This likely explains why Pugh felt the need to call out “bullying” while debunking those Poulter rumors, writing on her Instagram Story, “Regardless of your opinion of who I should or shouldn’t be with, at the end of the day if you’re complimenting someone by trolling another person.. you’re just bullying. There’s literally no need to be horrible online.”