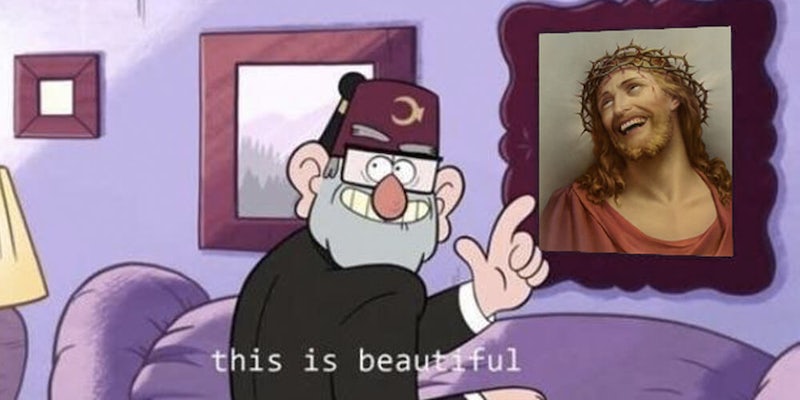 Someone used FaceApp on a painting of Jesus–and it works

Now people are trying FaceApp on famous paintings and memes.

The FaceApp craze may be dying down (again), especially with all the privacy concerns its raised, but there are still folks out there finding new ways to have fun with it.

The Russian-owned app lets you submit photos and select filters to radically alter the selfie of your choice. You can make the subject older, younger, masculine, feminine, or even turn a frown into a big ole’ smile.

But since the fun you can have with warping photos of yourself and your friends is limited–and every celebrity on the planet has been run through the app and shared to social media by now–users have figured out a new use for FaceApp: altering famous paintings.

While it’s unlikely he was the very first person to ever run a painting through the app, writer Alex Hirsch essentially kicked off the new FaceApp fad last week when he tweeted out a jarringly gleeful version of a painting, featuring Jesus Christ himself.

So it turns out the face app works on paintings and uh… pic.twitter.com/kq5aotEVLC

While the “smile” filters on FaceApp are notorious for how unnatural they look, when applied to paintings, they almost make the alternate version look like some sort of outtake–the subject caught enjoying life until remembering that art of their time period must be somber in order to be taken seriously.

After Hirsch shared his carefree version of Jesus, it wasn’t long before others jumped in with other famous paintings, featuring the likes of Mona Lisa, Vincent van Gogh, and more Jesus.

“Cured Van Gogh’s depression through the power of FaceApp,” one user joked.

Great. Now it looks like me when I see a dog.

So FaceApp works on paintings too.. pic.twitter.com/FUtY69Kutm

Cured Van Gogh's depression through the power of FaceApp, what a happy chappy pic.twitter.com/Bwpbtw7WQk

And of course, once paintings were on the table, it didn’t take long for memes to get the FaceApp treatment either.

Please never show anyone this image ever again

— Hibiki Tachibana is cooler than you (@JaydubKaydub) September 5, 2019

There may be a point when “fun” crosses over into the land of “vaguely terrifying,” and it’s entirely possible FaceApp being used in this manner has made that journey.