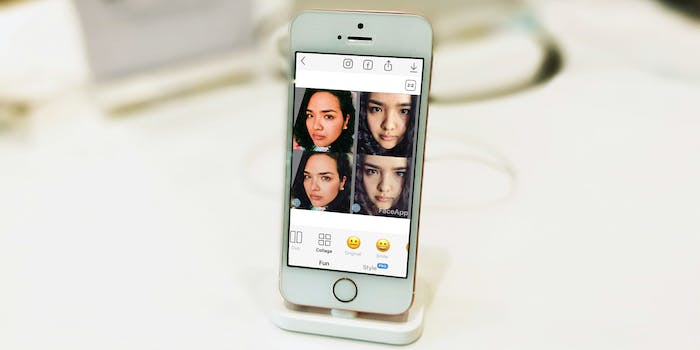 But if you're gonna shame FaceApp's filters, maybe you shouldn't use them yourself.

The AI-based selfie editing tool FaceApp has released a batch of new smart filters designed to swap the user’s race.

Yes, in its latest iteration the FaceApp tool now allows users to “look” black, white, Asian, or Indian. While the app is popularly known for using artificial intelligence to make users smile, appear a different age, or even a different gender, these new filters take selfie editing into racist territory.

The “ethnicity change” filters can only be used in conjunction with each other as part of a collage, presumably to show the contrast between the original photo and the race-swapped photos. This isn’t the first time FaceApp has (inadvertently) “played” with race—an earlier version of the app came under fire in April for lightening some users skin tones with a “hot” filter, which was designed to make the user appear more attractive.

As with the other FaceApp tools, the AI component attempts to make the “ethnicity change” seamless. Just take my own photos below (for reference, I’m Filipino and white). Here we see my original photos in the top row, with filters for “Caucasian” in the bottom-left and “Asian” in the bottom right. For the record, I definitely looked at what my photos for “black” and “Indian” looked like, but chose not to share them because, you know, blackface.

Clearly, my “face swaps” make me look like ambiguous depictions of white and Asian people. I can’t pinpoint just which country this “Asian” face is supposed to be from, but it’s clearly not the Philippines. Furthermore, it would appear that app’s developers weren’t really sure themselves just which ethnicities they were pinpointing under “Asian”— the “Indian” filter got its own label, despite India being a part of Asia.

Ultimately, these race-changing filters play into the acceptance of depicting another race for your own personal entertainment, a concept in the U.S. that can directly be seen in how blackface was used in vaudeville performances to make fun of black people at their expense. While we’re more quick to decry blackface today, this practice is still used to allow white people to portray people of color in TV and movies—as recently as this year’s Ghost in the Shell with Scarlett Johansson.

In a statement sent responding to the Daily Dot’s request for comment, FaceApp CEO Yaroslav Goncharov didn’t directly address the assertion that these filters might be offensive for allowing people to “try on” the appearance of another race for entertainment purposes. However, he did assert that the filters were designed equally, and contain no “positive or negative connotations.”

“The ethnicity change filters have been designed to be equal in all aspects. They don’t have any positive or negative connotations associated with them. They are even represented by the same icon,” Goncharov wrote. “In addition to that, the list of those filters is shuffled for every photo, so each user sees them in a different order.”

Despite Goncharov’s insistence, some FaceApp users are none too pleased with the new filters, voicing their disagreement and skepticism on Twitter.

(FaceApp board meeting)
"Our app is popular."
(Everyone nods)
"What if it could be more popular?"
(Everyone leans in)
"Get this: racism."

Everyone loves FaceApp, the phone app that adds smiles and wrinkles to your friends' faces!

We regret to inform you that FaceApp is racist pic.twitter.com/2tRSlcfWdc

However, this hasn’t stopped several people from denouncing the app’s new features while also posting their own blackface-d selfies.

Just a thought: it’s possible to rag on the app’s racist features without playing into the racism yourself.

Update 4:48pm CT, Aug. 9: Goncharov notified the Daily Dot via email that the filters would be removed “in the next few hours.”