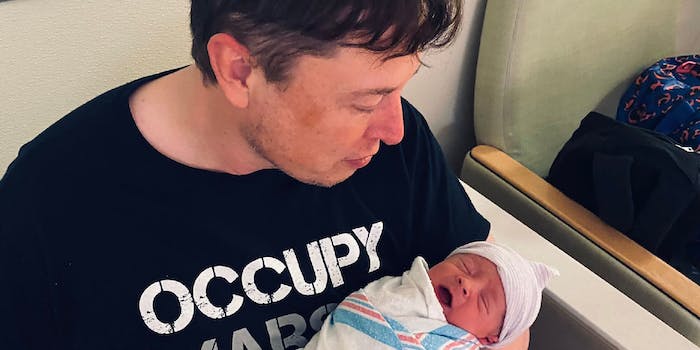 Elon Musk said the baby's name is 'X Æ A-12 Musk.' Now everyone's trying to figure out what that means.

The announcement was so subtle that it could almost be missed by the general populace. Almost. Despite Musk burying the announcement in response to a tweet, Twitter users were quick to spread the news.

In the evening hours of May 4, Musk tweeted that the baby was “a few hours away,” and not long after, another announcement had followed.

“Mom & baby all good,” he wrote, indicating that the birth had gone well and the baby was officially here.

Musk has been understandably tight-lipped about his new tot, but he did share the gender with curious commenters. It’s a boy!

After some pressing from fans, Musk even shared a picture. The first, in true Musk style, was a peculiar joke. He shared a picture of the sweet, sleeping infant with fake tattoos etched onto his face using a filter.

Not long after, fans were graced with a far more precious photo. This time the picture showed Musk holding his baby.

But Musk took commenters off guard when he announced the baby’s name via Twitter––or at least joked about it. Given that this is Elon Musk, the same man who claimed in 2016 that he “used to be an alien,” most things he says are taken with a grain of salt. Still, many people took the name announcement to heart.

If Musk’s late-night tweet wasn’t in jest, he and Grimes welcomed their son, X Æ A-12 Musk, into the world yesterday. Despite the curious name announcement, Musk fans were joyous over the news. They shared their heartfelt congratulations with the billionaire Tesla CEO.

Mixed into all the enthusiastic reactions were a few tweets communicating genuine confusion.

One redditor thinks they may have cracked Musk’s code. Combining a Latin ligature (the Æ) and a particular aircraft (the Lockheed A-12), she thinks she may have figured out the name. “X Ash Archangel?” she guessed via Twitter.

When Musk responded with a like, it was all the confirmation she needed.

She wasn’t the only one to try her hand at translating the name. Soon, Twitter users were caught in a heated debate over what, exactly, Musk meant by his tweet. If the baby isn’t named X Ash Archangel, what about… Neal?

Others just shared their theories over why Musk chose that collection of numbers, letters, and symbols.

“X for SpaceX, AE for After Earth, and A-12 for the original SR-71 designation, which was the first reusable vehicle to go to space,” one user wrote.

One theory seems particularly well considered, from Twitter user @BaeBradbury. She noted that “it’s a combination of their weird E and C nickname theme, plus science, plus the name of one of her songs on her last album she made while with him.”

As she noted, the “Æ,” at least, likely comes from Grimes’ 2019 song “4ÆM.” Combine this with Grimes’ mid-2018 announcement that she was legally changing her name “from claire to ‘c’ as in the speed of light,” and @BaeBradbury’s guess suddenly feels very valid.

This is Musk’s seventh son, but his first with Grimes. Given the baby’s birthdate—not only on Star Wars day but also 4/20—this one is already well set up to be a crowd favorite.