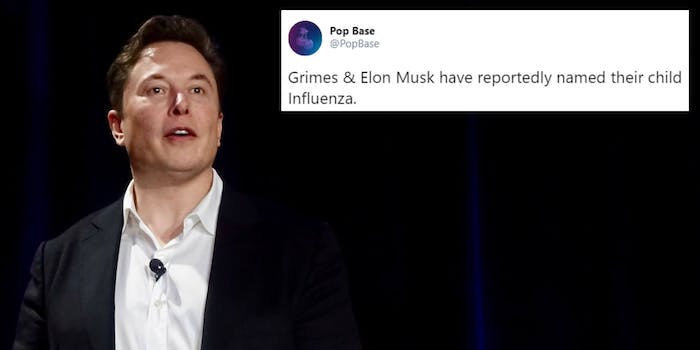 No, Elon Musk and Grimes are not naming their kid ‘Influenza’

The false claim spread across Twitter and produced countless memes.

Rumors spread across Twitter this week that billionaire Elon Musk and Canadian musician Grimes have planned to name their child “Influenza.” As plausible as that may seem, it is, unfortunately, entirely untrue.

The false claim, according to Know Your Meme, appears to have originated on a fake news site known as “World Grey News.”

Titled “Grimes named her child WHAT,” the faux article includes a BBC News logo and even a fake quote from the artist defending her unborn child’s name.

“After a leaked picture of the babies birth certificate, we have now found out that the name of Techno feminist dark etherealist grimes and tech mogul Elon musk’s child is Influenza Mae musk,” the grammatically error-ridden article states.

The hoax began gaining traction on social media and was eventually tweeted by “Pop Base,” a Twitter account that has close to 24,000 followers and shares pop culture news.

The tweet was shared nearly 2,000 times and received over 19,000 as of Thursday evening.

It wasn’t long before Twitter users began producing memes revolving around what they assumed “Influenza Musk” would be like.

“influenza musk when someone asks her what her name is,” @uncuntgems said.

Some speculated that Influenza wouldn’t stick around very long after being born and would quickly return to their home planet.

Others noted the likelihood that the child would be bullied in school given its peculiar name.

“influenza musk on the way to change their name an hour after being born,” @tyesheriidan joked.

Thankfully, it’s safe to assume that the child, which is expected to be born on either May 4 or May 5, will not be named after an infectious disease.