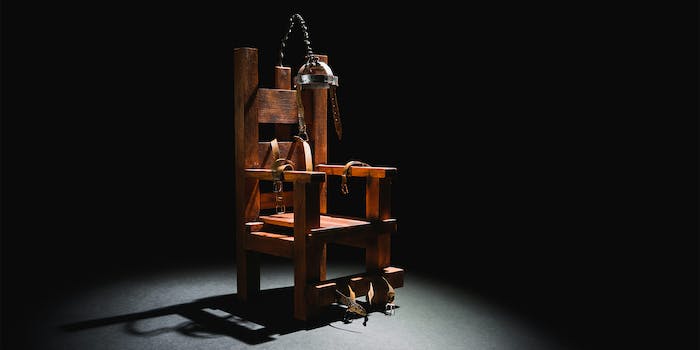 This meme sentences people to the ‘electric chair’

Bring that gavel down!

Many people commonly associate the United States death penalty with electrocution by electric chair. But the practice is rarely used anymore in favor of lethal injection, which is seen to be a much more humane way of euthanasia. In fact, only a handful of states including Alabama, Florida, South Carolina, Virginia, Kentucky, and Tennessee still employ the practice, but only at the request of the inmate. Seems like a pretty unpleasant way to die, but hey, to each his own?

Perhaps this is the reason why the phrase has made a resurgence, where people are using “electric chair” as a particularly colorful form of internet slang for telling someone that they deserve the death penalty for something they said or did.

What does the electric chair meme mean?

Electric chair first began making the rounds online earlier this year, and the phrase can be dated to January of 2019 when an Urban Dictionary post defined it as: “stan twitter uses it as a way for wanting someone to die.” An example provided: “send Robert Downey Jr. to the electric chair already.” Evidently, the entry was provided by someone who is extremely #TeamCap.

At any rate, the term has been gaining momentum over the past few months, thanks in part to a clip of TS Madison and Khia, former hosts of the web series Queens Court, that has been viewed hundreds of thousands of times. “What’s your sentence for her?” asks TS Madison, to which Khia bluntly answers, “electric chair” while pounding down a gavel.

The beauty of the clip—captured below by the Reaction Pictures Twitter account—is just how succinct and versatile it is, to be used in any number of situations.

Here’s the full clip from 2017, in which Khia “sentences” model Blac Chyna, who has a child with Rob Kardashian, to the electric chair. Chyna got a temporary restraining order against Kardashian after he posted explicit images of her on social media. In the clip, Khia criticizes Chyna for fighting with Kardashian over a Range Rover she had gifted him—which she ultimately won back.

As you can see in just a handful of examples found on Twitter, people are using “electric chair” to roast everything from Whopper rolled ice cream and TikTok “fitness freaks” to the movie Green Book winning best picture at the 2019 Academy Awards.

Then there’s this very fine example putting a cringe-worthy bit of dialogue on blast from the Netflix reality series Dating Around:

And whatever the fresh hell going on in this video definitely deserves the electric chair:

what the fuck. electric chair. https://t.co/rSAIBWGAXh

You’ve got to admit, “lethal injection” just doesn’t have the same ring to it.