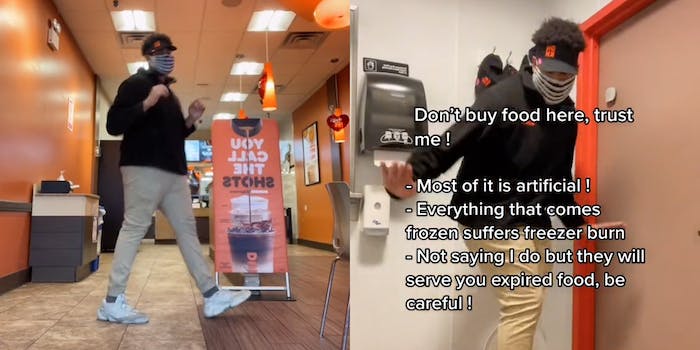 An apparent Dunkin’ worker alleged in viral TikToks that the food is shipped into the stores frozen and that workers will sell customers expired food, telling customers not to “buy food here.”

Jordan (@itsjusjordann) is a New York-based Dunkin’ worker and TikTok content creator with 24,000 followers. His TikToks went viral this week.

The TikToker’s “Exposing Dunkin’ Donuts Part 1” video got over 171,600 views and 225 comments since being posted four days ago. The video features Jordan dancing in a Dunkin’ office with the text layover reading: “We don’t make the Donuts… They’re shipped every morning.”

His “Exposing Dunkin’ Donuts Part 2” video again features him dancing in a Dunkin’ store while allegedly spilling secrets. In both videos, Jordan is in uniform. Captioned “Lmk what y’all wanna see exposed before I leave here,” the video got over 65,300 views since being posted on Tuesday.

The worker alleges that “Most of it is artificial! Everything that comes frozen suffers freezer burn. Not sure saying I do, but they will serve you expired food, be careful!”

Past employees have similarly alleged that the donuts aren’t fresh. TikToker Sophia Fischett (@sophiafischett) recently went viral for inadvertently showing some viewers that at least some of the donuts come frozen. Viewers were stunned by the apparent revelation, and, Fischett, who also works at Dunkin’, told the Daily Dot she was “confused to learn that not alot of people knew that things were frozen!”

“It definitely varies from store to store, some places don’t have frozen, some do,” she told the Daily Dot at the time.

On Jordan’s video, some viewers aimed to confirm the allegation.

“I knew that bc my grandpa delivers them and I get free donuts,” @enzoy.999 said.

“He’s not wrong worked there for 5 years,” @jerryphilippe24 claimed.

Viewers are also begging Jordan for more Dunkin’ content in the comments section. “More please I go to Dunkin almost everyday,” one urged.

The Daily Dot reached out to @itsjusjordann and Dunkin’ via TikTok message and email for comment.