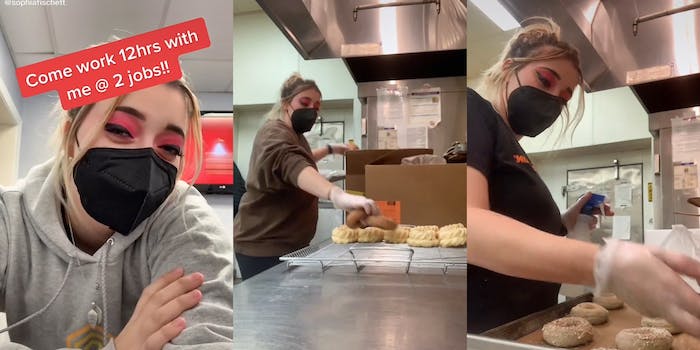 ‘The donuts are FROZEN?! My life has been a lie’: Dunkin’ worker reveals donuts are frozen in viral TikTok (updated)

'Hold up, you telling me the donuts in the morning aren't fresh made.'

TikToker Sophia Fischett (@sophiafischett) inadvertently revealed to many viewers that at least some of the donuts at Dunkin’ come frozen.

In her “go to work with me”-style video, Fischett shows viewers what her average day of working two jobs—one in a hotel and the other at Dunkin’—looks like. She shares the donut-making process during her evening shift at Dunkin’. She pulls frozen donuts and other bakery items, like biscuits, out of the freezer and places them in the oven.

The video has received 51,000 views on the platform so far.

This bit of information—that some of the items at Dunkin’ Donuts are not made fresh, in-house—was a surprise to many.

“The donuts are FROZEN?! My life has been a lie,” one said.

“Hold up, (you’re) telling me the donuts in the morning aren’t fresh made?” another commenter wrote.

In response, Fischett said that this process alone takes her three-five hours and that it wouldn’t be possible to make the donuts fresh before the store is set to open.

Others, however, couldn’t believe some people thought the donuts were made in-house.

“The fact people actually think the donuts are made there,” one wrote. “I find better donuts at the gas station tbh.”

Another commenter claimed that a family member of theirs owns several Dunkin’ locations and that the donuts were made in-house at one point. “My uncle owns several DD’s in the North,” the commenter wrote. “The donuts used to be made fresh everyday but that changed many years ago. Now they are made somewhere else.”

Update 7:05am CT Jan. 21: When reached for comment, Fischett told the Daily Dot she was “confused to learn that not alot of people knew that things were frozen!”

“It definitely varies from store to store, some places don’t have frozen, some do. & all the people encouraging me to keep going and stay happy while working all my crazy hours has been nice to see,” she added.

Fischett said she loves to make “fun content” on the platform and that she’s considering launching a podcast.

“Maybe if (my TikTok account) goes in a good direction that could be some future content,” she said.

The Daily Dot reached out to Dunkin’ regarding its donut production.