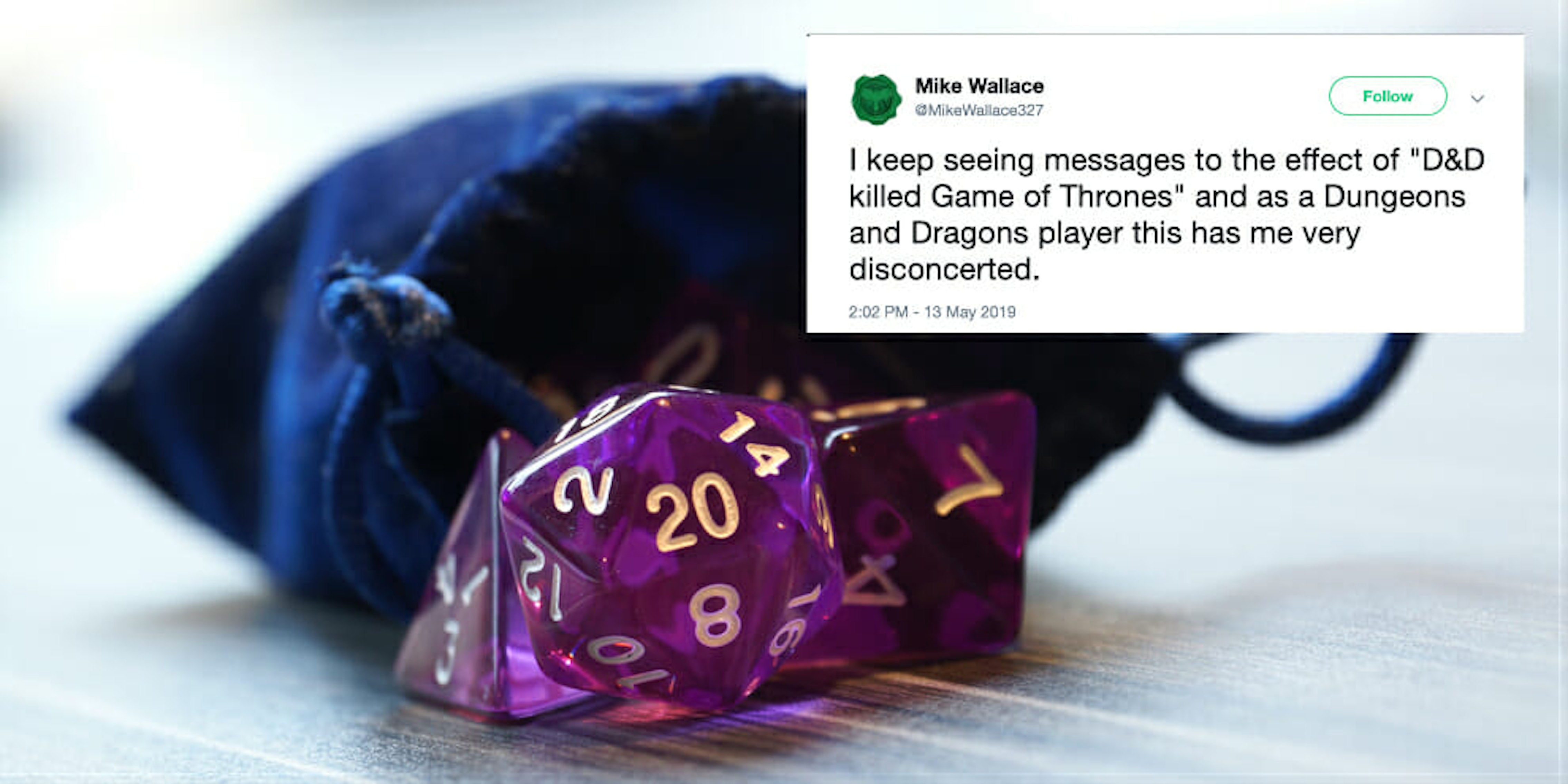 No, Dungeons & Dragons is not ruining the HBO show.

While this season of Game of Thrones certainly hasn’t been without controversy, once the dragons have been shot down, the castles sacked, and the heroes turned to villains, there may be one additional, unintended legacy the show leaves in its wake: confusing the hell out of tabletop fans.

Similar to the portmanteaus coined for other shows helmed by two creators, such as ‘Bryke’ for Avatar the Last Airbender’s Bryan and Mike, and ‘Darlton’ for Lost’s Damon and Carlton, the Game of Thrones commentariat has settled on a bite-sized nickname to refer to show creators David Benioff and Daniel Weiss—D&D. The initialism has been kicking around the GoT fandom since at least 2015 but has recently seen an uptick as the contentious writing choices of season 8 prompt fans to take aim at the showrunners directly.

Live footage of D&D blowing up 7 seasons of character development and lore for the sake of shock and awe at the last moment #GameOfThrones pic.twitter.com/pjKlu7XSFH

D&D really threw away all of Jaime’s redemption arc, Dany’s whole protector of the innocent storyline, Arya’s faceless assassin skills, Bran’s 3 eyed raven abilities, and and all the hype around the golden company away in just one episode. Really?? #GameofThrones #GOTS8E5 pic.twitter.com/cOBBdODEAT

Me watching D&D ruin the show and characters I love and adore #GameofThrones pic.twitter.com/48HDKtNQI8

But for tabletop fans who have been abbreviating RPG behemoth Dungeons & Dragons the same way, the influx of Game of Thrones critique in ‘D&D’ tags has led to more than a few crossed wires. “Ever since Season 8, the producers have been referred to as D&D far more frequently,” observed Twitter user @genderposer. “It’s just the jarring effect of seeing the acronym and then seeing it used to refer to something else than what you grew up with.”

For people who are mad about game of thrones….. why the fuck are you taking it out on dungeons and dragons….. excuse you what that fuck does it have to do with DND

Me, an intellectual: Actually Dungeons and Dragons did nothing wrong and is a well suited medium to explore the interpersonal drama GoT was known for in it's first seasons

I keep seeing messages to the effect of "D&D killed Game of Thrones" and as a Dungeons and Dragons player this has me very disconcerted.

so you mean for weeks I thought people talking about "D&D" when speaking about Game Of Thrones were comparing with Dungeons and Dragons, when in fact they were talking about the fucking creators of the show??? pic.twitter.com/h4kx77ZOZV

“I was so confused about why so many people were comparing Dungeons & Dragons to Game Of Thrones,” Twitter user @elf_hobbitch told the Daily Dot. “And then a few days ago I saw a tweet talking about D&D, with a picture of Benioff and Weiss, so I realized that all along all those people were talking about them and not Dungeons & Dragons—a game that is way less disappointing than these two showrunners, in my opinion.”

“It made me do a double take, several times,” said The Dragon Prince executive producer Giancarlo Volpe.  “I literally assumed someone was playing a Game of Thrones-themed D&D campaign and realized the two weren’t compatible or something. I was just sort of speed reading my feed as people do and thinking, ‘why all the D&D hate all of a sudden?’”

Noticing the overlap, many Dungeons & Dragons fans took to Twitter to point out the confusing collision of these fandoms’ respective lingo, and they implored GoT critics to use a shorthand not already in popular usage.

Can we call the Game of Thrones guys something besides D&D? I keep thinking people are mad at the show because of Dungeons and Dragons, which in a weird way almost makes sense and is therefore extra confusing

Can we stop calling Benioff and Weiss "D&D?"
While Benioff and Weiss made huge logical/character leaps from Point M to Point Y and gave us reason to think Star Wars in their hands is a bad idea…
Dungeons & Dragons is a wonderful game and I would welcome that collab. #jedidruid

“Being in animation, I recognize how hard it is to stick the landing on these TV shows,” added Volpe, who has also worked on Avatar the Last Airbender and Clone Wars. “So I wasn’t necessarily adding to the criticism about their choices. I just genuinely wanted to call out the potential confusion. You can’t just decide an acronym as iconic as “D&D” now means something else, can you?”

Though polysemy in franchise abbreviations isn’t an entirely new linguistic quirk (massive online games such as World of Warcraft and League of Legends come to mind), the iconicity of the Dungeons & Dragons brand makes this a particularly tricky mix-up between two tentpoles looming equally large in the geek zeitgeist.

The popular resurgence and general goodwill Dungeons & Dragons enjoys today stands in stark contrast to the 900,000-strong outcry against this season of Game of Thrones. Though the coincidence in abbreviations is largely unintentional, some viewers have drawn unflattering parallels between the two properties in light of the slapdash nature of GoT’s final episodes.

Wizards of the Coast, the publisher of Dungeons & Dragons, declined to give a comment to the Daily Dot on whether the ‘D&D’ overlap has affected their brand or feeds, but it’s definitely an association avid dungeoneers would rather not have ascribed to their favorite game.

“It’s such a truly wonderful and creative way to tell stories and have fun with friends,” said Horcher, en route to the massively streamed actual-play event D&D Live. “I would hate for people to associate rushed, needlessly frenetic and self-undermining fantasy storytelling with Dungeons & Dragons.”