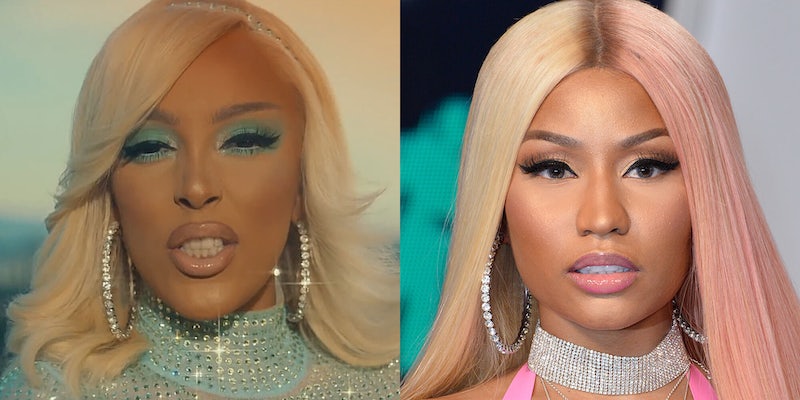 Some fans felt like Nicki Minaj was proud to no longer identify as bisexual.

Doja Cat released a remix of her viral TikTok hit “Say So” featuring Nicki Minaj on Thursday night, and fans are not OK.

It was a bumpy road leading up to the “Say So” remix. Doja Cat beefed with Minaj fans (or “Barbz”) on Twitter last month, calling them “Twitter gangsters” and “scum” and prompting the Barbz to trend #DojaCatisOverParty. Doja squashed the beef a week later by professing her love for Minaj on Zane Lowe’s “Beats 1” show. Earlier this week, a different collaborative version of “Say So” began circulating. Minaj confirmed on Instagram that it was not the official version and told fans to stay tuned for the new one.

Now, the official “Say So” remix is here, and fans have a lot of feelings. #SaySoRMX became the second-biggest U.S. Twitter trend early Friday morning, behind Drake, who just released his Dark Lane Demo Tapes mixtape. Most fans were thrilled to see the two pop-rap queens on a track together.

Others, however, took issue with a line in Minaj’s verse, where she raps, “Used to be bi, but now I’m just hetero.” Some fans were upset with what they considered an implication that Minaj was proud to no longer identify as bisexual.

Divisive lyric aside, the “Say So” remix is already a big hit among most fans. The song has already soared to No. 5 on the Billboard Hot 100, and with Minaj’s help, it could climb even higher.

The remix gives a harder edge to the breezy, disco-pop track, which originally appeared on Doja’s 2019 album Hot Pink. The first chorus gives way to a propulsive hip-hop beat, and Minaj delivers a fiery verse before tapping Doja back in for another chorus and rap verse. Minaj reappears at the end of the track to drop some more bars and vocal ad-libs.