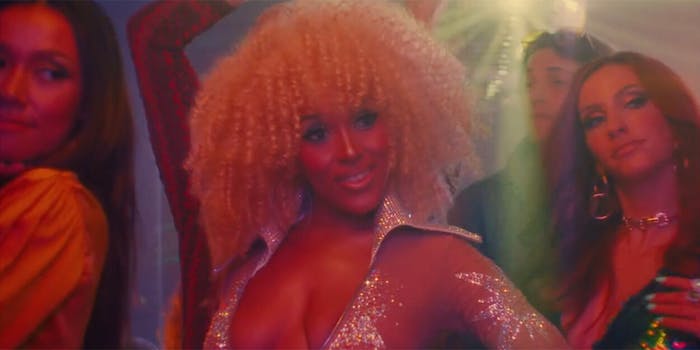 The “Say So” dance popularized on TikTok has made its music video debut.

BuzzFeed News reports Doja Cat’s new 1970s-inspired music video for “Say So” features Haley Sharpe, the teen who created the viral dance and made the song a staple on TikTok.

the girl who created the say so dance was in the mv with doja cat pic.twitter.com/RktKxeOyPY

Sharpe posted the full dance back in December of last year, giving viewers a step-by-step tutorial.

In her music video, Doja Cat replicates Sharpe’s signature dance moves. Sharpe makes an appearance at the end of the music video, letting loose in the middle of a disco-lit dance floor.

DOJA CAT INCLUDING THE SAY SO TIK TOK DANCE AND THE GIRL WHO CREATED IT IN HER MUSIC VIDEO IS SO CUTE …. I AM SO OBSESSED WITH THIS WOMAN pic.twitter.com/zwSuNSyaKz

The music video has gotten loads of accolades online, with some Twitter users already dubbing it the best music video of the year.

It’s not uncommon to see celebrities and TikTok users taking part in the “Say So” dance trend. In December, actress Laura Dern crashed her daughter’s TikTok to show off her own moves to the catchy tune.

Many gave kudos to Doja Cat for making it a priority to include Sharpe in her video. Sharpe’s recognition comes after a New York Times article spotlighted how Jalaiah Harmon, creator of the popular Renegade dance, went noticeably uncredited as Renegade picked up steam on TikTok.

“One of the most perennial questions of the past decade on social media—who owns a viral dance?—has naturally resurfaced on a platform where dancing has the potential to make you a millionaire,” Vox wrote.

Since the New York Times article, Harmon has received increased recognition for her talents and dance contributions.

The Doja Cat one is cool because Haley invented the dance that made the song popular on TikTok and pushed it into the Top 40, and she does it in the mv pic.twitter.com/GPo3vzvC6H

Sharpe, who did not immediately Daily Dot’s request for comment, thanked Doja Cat on Instagram for including her in the “Say So” video.

WOW!! thank you SO MUCH @dojacat for having me in the Say So music video. you’re amazing!! this is unreal and it was just such a dream AAH♥️♥️ (for everyone asking, i didn’t pet the tiger)