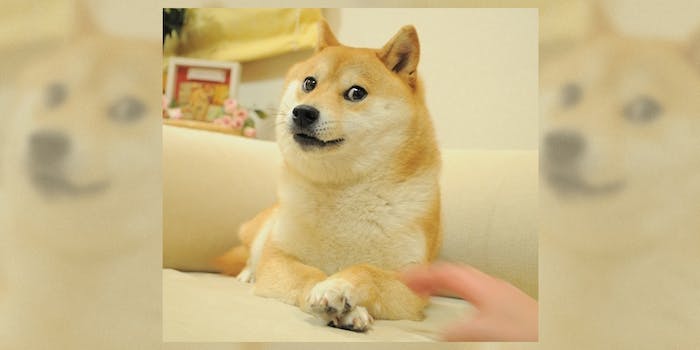 The very longevity of Doge, the Shiba Inu meme that is still such popular

In today’s topsy-turvy meme economy, beloved characters rise and fall rapidly, victims of their own popularity. But the best, strongest memes evolve and survive. In 2013, a lovable Shiba Inu dog, nicknamed Doge, was the biggest thing in Internet culture. It may have been years since you thought about him, but he’s not gone—he’s just hiding out on Tumblr. Such resilient. Very adaptation.

Doge burst onto the meme scene in late 2013 with a lot to offer. Cute dogs were a plus, and so was doge’s unique syntax. Modifiers like “so,” “very,” “much,” and “such” were misapplied for a laugh, usually in the jokey Comic Sans font. There was very rejoicing and such happy. Wow.

In November of that year, Gawker’s Adrian Chen declared that, although memes themselves had become tiresome, Doge was refreshing. It was, against all odds, “an actually good meme.”

Doge fever caught on quickly, among the general Facebook and Reddit populace and from curious reporters and academics. In December, Kyle Chayka of the Verge finally tracked down the real Shiba Inu from the most famous doge image: an 8-year-old rescue dog named Kabosu—after a citrus fruit—who lived with a kindergarten teacher in Japan. Linguists pondered the way Doge used quantifying words in the wrong syntactic slots. A form of digital currency was christened “Dogecoin.”

This was peak Doge. 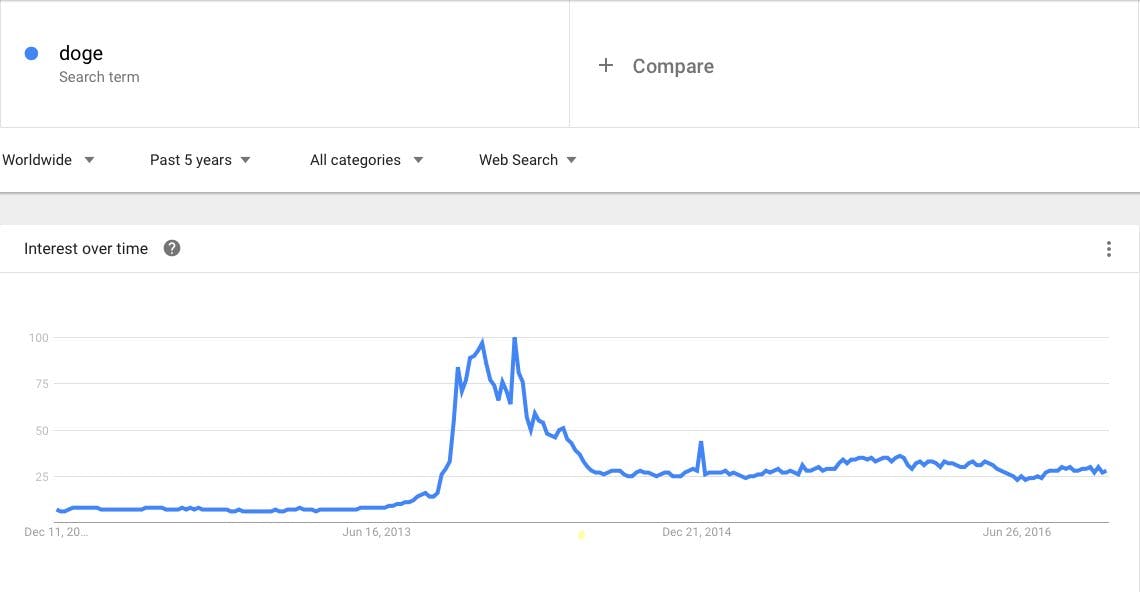 Over the course of 2014, Doge fell victim to overexposure and co-option by advertisers and mainstream “normies.” Its fortunes declined as the online masses found other things to focus on: tea-sipping Kermit, Kim Kardashian’s nude magazine cover, and the Ice Bucket Challenge. Many, including this very website, declared Doge “dead.”

But a meme that is such vibrant and very thrive doesn’t die that easily. Check out the Google Trends graph above: searches for Doge have persisted at the same quiet and steady hum for the past two and a half years.

Does the undying love for Doge surprise you? That’s because the good Comic Sans dog no longer has a home on Facebook, Twitter, or Reddit. His new home is Tumblr.

Doge has made Tumblr’s list of the most-reblogged memes every year since it first appeared. This year, it’s back in the top 10, barely sneaking in at 10th place. That’s up from 14th in 2015. The numbers point to a doge renaissance on Tumblr.

Although there were fewer original Doge posts this year, “likes are up year over year between 2015 and 2016 (up 70 percent this year).”

“The memes are still moving and maybe the old doges are learning new tricks,” the same Tumblr spokesperson said.

The admins of popular Facebook meme groups also have the impression that Doge is over on Facebook—at least in its pure, sincere, non-ironic form.

The person behind the page “I play KORN to my DMT plants, smoke blunts all day & do sex stuff,” a staple of Weird Facebook, told the Daily Dot that they had started posting “weaponized” Doge memes last year as a way to weed out “normie” followers who couldn’t handle the KornDMT community’s high irony levels.

And ironically, KornDMT’s bizarro Doge remixes may have helped spark the Doge revival on Tumblr. An admin of another Weird Facebook page, The Content Zone, floated that theory in a Facebook chat with the Daily Dot:

“Last I saw on fb, ‘I Play Korn to my DMT Plants’ was on some post-doge hyperabsurd remix kick so I wouldn’t be surprised if that’s what’s keeping doge relevant on Tumblr,” they said.

Facebook’s meme braintrust seems to see Doge as a meme that’s generally funny, but too cute and harmless for the aggressive irony of the 2016 meme landscape.

On Tumblr, though, Doge’s spirit of innocent fun is a strength, not a liability.

“Doge seems cute and not objectionable in any way. Makes sense it’s still popular in that venue given the demographic (tweens/teens?),” said the Content Zone admin.

“These things take on a life of their own.”

And on Tumblr, as people o used to say in 2013, Doge is everything.

The most popular Doge post of the year, in fact, was a joke about how the meme never went away:

It seems the shibe has transcended its original frame and become the ur-dog, a synonym for dog itself.

“We know Tumblr users reference ‘doge’ interchangeably with words like ‘doggo’ and ‘pupper’ as an endearing way to talk about dogs, so it might be an even bigger evolution of the original doge meme,” a Tumblr rep told the Daily Dot.

“You could compare it to the internet’s inclination to diminutize words to their cuter form, like using “smol” instead of small,” she said.

And Shiba Inus themselves are still a thing, with or without the Comic Sans and bad grammar.

There’s a Doge that reviews wines.

There’s a Doge whom Marxism:

And now, a Doge can bork—Tumblr doggo slang for barking or being aggressive.

There’s little irony to be found in this segment of Tumblr, just good puppers and doggos doing a bork.

Doge isn’t dead. The Shibu Inu peaked years before the game of “killing” memes, the lively back-and-forth between the meme teens who make things cool and the normie media outlets who ruin them, had fully evolved. So, rather than dying the death of Dat Boi, or being unfairly co-opted as a hate symbol like Pepe the Frog, Doge has found a friendly place to live out his retirement.

“maybe memes dont really die when we think they do,” KornDMT told the Daily Dot.

Correction 3:41pm CT, Aug. 9, 2019: An earlier version of this article gave the wrong translation for the original doge’s name; Kabosu is a type of citrus fruit, not a pumpkin, and the dog was so named for its head shape, which resembled the fruit. Furthermore, the linguistic quirk of dogespeak tinkers with a sentence’s syntax but not its words’ lexical function.