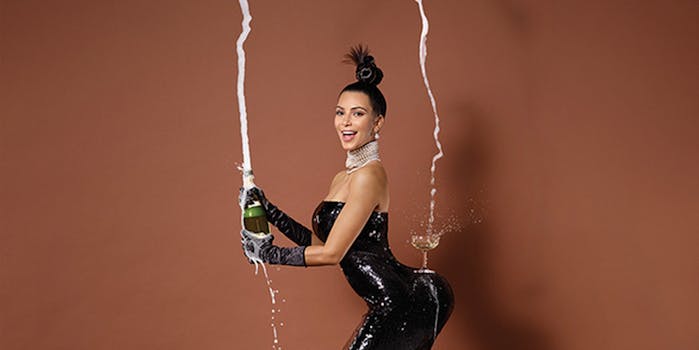 …but it did put a crack in it.

The Internet isn’t broken, but it does have a crack in it.

Having some difficulty with your Wi-Fi connection today? Don’t panic and call your local cable provider just yet. This photo of Kim Kardashian balancing a champagne glass on her ass is to blame.

Paper Magazine new cover alert! – such a honor to work with the legendary 📷 Jean-Paul Goude!!!! Shot this in Paris. Can’t wait for you to see the the whole issue 🙈

The above images are from Kim K.’s Paper magazine cover shoot with the legendary photographer Jean-Paul Goude, and they were apparently intended to “break the Internet,” if Paper’s headline and this tweet from Kim K. herself are any indication:

She has a point there. Could that hashtag ratchet Willow Pape ever accomplish such impressive callipygian feats? Hashtag never.

It’s unclear how, exactly, Kim thought a photo of her naked rear end would “break the Internet,” Minaj-style, considering we’ve all seen it many times, here, here, and (of course) here. Maybe she thinks the combined traffic from everyone looking at her photo will cause everyone’s Wi-Fi connection to momentarily slow down. Maybe she’s planning on going to your house and smashing your modem/router in with a ballpeen hammer. Maybe she has a little hacker living inside her sphincter. I mean, who the hell knows. The point is, if by “break the Internet” she actually meant “inspire the Internet to Photoshop her head on the body of a centaur,” then Kim K.W. was largely successful.

Kim Kardashian looks so much like a centaur in Paper Magazine, I figured I’d take it one step further. pic.twitter.com/Sh70yV43gE

And it looks like the trend is catching on.

Can you believe more than 2 ass can fit on the same screen? Guess which one’s real. Your move, instagram.

A photo posted by Chelsea Handler (@chelseahandler) on