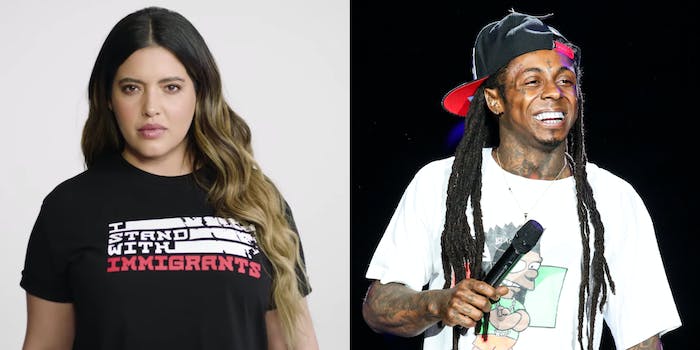 Lil Wayne’s girlfriend dumps him after he supports Trump

According to MTO News, Bidot, a 34-year-old model from Miami who reportedly supports Joe Biden for president, didn’t want to date a Trump supporter.

Lil Wayne’s ex-girlfriend, Denise, is originally from the Dominican Republic – and she’s been a supporter of Joe Biden and Kamala since the beginning of the election season.

Denise’s friend also explained to MTO News, “[Denise] was shocked when she saw Wayne come out with Trump. She’s so disappointed in him.”

The friend continued, “She broke up with Wayne. It wasn’t just his Trump support, but that was a big part.”

Bidot also recently deleted her Instagram, which until last month boasted nearly 800,000 followers. According to Hip-Hop DX, Bidot shared a cryptic Instagram Story on Sunday alluding to the breakup: “Sometimes, love just isn’t enough,” it read, per Hip-Hop DX. The two had reportedly been dating since June.

As the Daily Dot reported on Oct. 29: “Wayne said he discussed a wide range of issues with the president, including criminal justice reform and the Platinum Plan—a proposal from the Trump administration aimed at bolstering economic prosperity for Black Americans.”

Online, Bidot is being applauded for the move.

It remains unclear whether Wayne actually voted or plans to vote for Trump, or whether he was simply saying he was willing to work with him. Apparently, for Bidot, it doesn’t matter either way.

We’ve reached out to Bidot’s team.