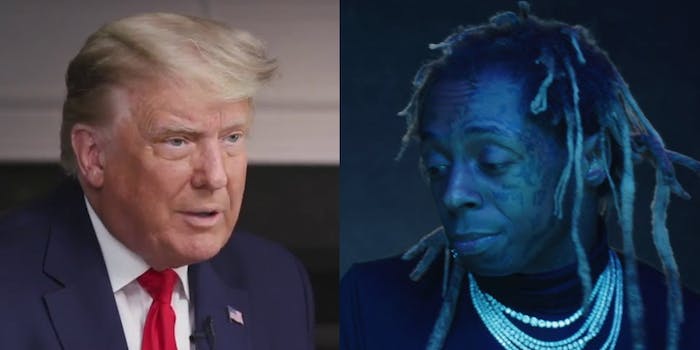 Internet in shambles after Lil Wayne meets with, praises Trump

His past controversial statements on police brutality and Black Lives Matter are resurfacing.

The internet is in shambles after Lil Wayne revealed that he recently met with President Donald Trump.

In a tweet featuring a photograph of himself with Trump on Thursday, Wayne said he discussed a wide range of issues with the president, including criminal justice reform and the Platinum Plan—a proposal from the Trump administration aimed at bolstering economic prosperity for Black Americans.

“Just had a great meeting with @realdonaldtrump @postus,” the tweet begins. “Besides what he’s done so far with criminal reform the platinum plan is going to give the community real ownership. He listened to what we had to say today and assured he will and can get it done.”

The tweet, which has since racked up nearly 100,000 shares, was quickly met with both praise and condemnation from countless people online. Many opposed to the meeting accused the rapper of selling out for agreeing to sit down with the president. “It’s sickening how Lil Wayne and so many rappers I grew up with are selling out to white supremacy,” @FredTJoseph said.

Many are reacting to the tweet with memes. “Weezy F baby and the F is for Fascism,” one user quipped.

Others are unsurprised about Wayne’s pro-Trump post given his past controversial statements on police brutality and the Black Lives Matter movement. “He already told y’all who he was,” one user wrote of Wayne.

Supporters of the president, however, unsurprisingly praised the rapper for what they believed was an endorsement after Trump retweeted Wayne. “Lil Wayne is on board to #MAGA with @realDonaldTrump!” @thejtlewis wrote.

In reality, it’s not entirely clear whether Wayne has actually endorsed the president or merely expressed a willingness to work with him. Iconic rapper Ice Cube was also criticized earlier in October after it was revealed that he met with the president to discuss the Platinum Plan as well.

Despite attempts by Trump’s reelection campaign to claim that Cube had endorsed Trump, the rapper later came forward and announced that he did not.

Cube stated that he met with both Republicans and Democrats solely in an effort to aid the Black community and that he hadn’t endorsed either Trump or Democratic presidential nominee Joe Biden.

50 Cent likewise found himself in a similar situation in October after criticizing a proposed tax hike on wealthy Americans from Biden. In a post on his social media accounts, 50 Cent told his followers to vote for Trump.

Comedian Chelsea Handler, a friend of the rapper, has since claimed that 50 Cent is actually voting for Biden.