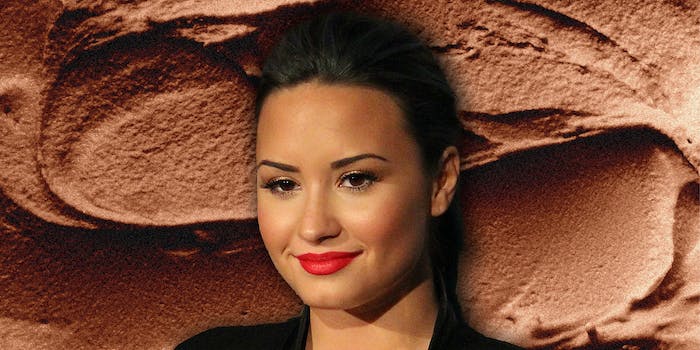 The Dancing With the Devil singer sounded off on frozen yogurt shop the Bigg Chill recently for its selections of sugar-free desserts. She claimed the items were “triggering” for her as a woman healing from an eating disorder.

Lovato has been transparent regarding her battles with bulimia.

“Finding it extremely hard to order froyo from @thebiggchillofficial when you have to walk past tons of sugar-free cookies/other diet foods before you get to the counter,” she wrote on Instagram. “Do better, please.”

She tacked on the use of the hashtag “#dietculturevultures,” for what she claimed was “harmful messaging from brand and [companies] that perpetuate a society that not only enables by praised disordered eating.”

The Bigg Chill, though, not pleased with her notions, said, “We carry items for Diabetics, Celiac disease, Vegan and of course have many indulgent items as well.”

Perhaps to provide full disclosure, Lovato also shared her direct messages with the Bigg Chill from her Instagram Stories.

“We are not diet vultures,” the Bigg Chill wrote in one message. “We cater to all of our customers’ needs for the past 36 years. We are sorry you found this offensive.”

Many women called Lovato out for leveraging her platform to bash a small business for her personal experience. One person even called her “Karen Lovato.”

She has also tried to offer unsolicited branding ideas, even after it was clear the company wasn’t having anything she was serving following her disrespect.

@itsbrittnayyybi tweeted: “how is she gonna basically say “oh yeah well i also just didn’t like the service, y’all rude!” and then not go into detail abt it and instead attack the restaurant “encouraging” disordered eating?”

Some on Twitter noted that perhaps Lovato was making the right read in the wrong way, and not specific enough to begin with regarding the diet culture language portion of her beef with the Bigg Chill.

“I’m sorry but demi lovato is literally correct about calling out diet culture advertisements and y’all have been gaslighting and mocking her for no reason,” tweeted @theartofdems. “Eating disorder professionals have literal studies proving what she just called out; it’s sad af seeing her be invalidated.

For example, the Bigg Chill appears to have taken down a post which Lovato herself pointed out possibly fits into the negative language pattern she’s describing, in promotion of branded “Eat Me Guilt Free” cookies.

“This screams diet culture and I won’t be gaslit by the media or anyone else that says otherwise,” she wrote on her Stories. “I don’t need to feel guilt free about eating anything. This is what I was talking about and this is directly from their own page.”