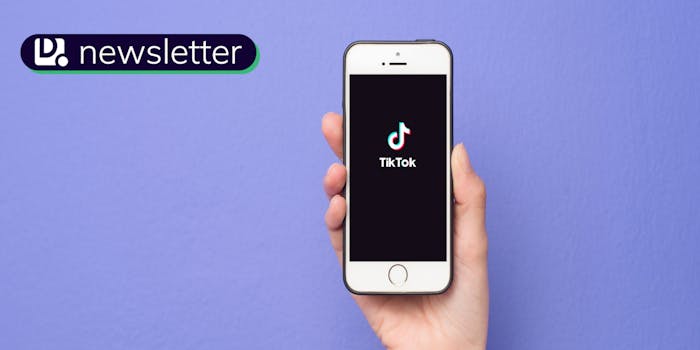 Newsletter: ‘I want to go home’

It’s Monday, which means it is time for our weekly “One Dumb Conspiracy” column from our Tech Reporter Mikael. Besides that, we’ve got a ton of the most pressing internet culture news for you.

WORK DYSTOPIA: A remote worker is alleging in a series of viral videos that her employer spied on her through her webcam, locked her out of her computer for getting up from her desk, and suspended her for speaking out about it on TikTok. The videos sparked a number of comments from people on the platform, one of which warned: “You should always cover your camera.”

THAT ONE SOUND: In her weekly “That One Sound” column, our Senior Culture Reporter Audra breaks down the “I want to go home” sound that has gone viral on TikTok. The sound has been used in nearly 200,000 videos and “conveys that feeling introverts know all too well,” Audra writes. You can read more about the sound here.

VIRAL: A TikToker has gone viral for posting a video in which she reveals a “common trick” that she says is used by “bad managers.” In the video, she says managers “steal your knowledge” to keep staff a “certain level” and keep raises low. Many people resonated with the video, claiming they experienced it in their own workplaces.

No, the FDA did not find horse meat in Wendy’s burgers

The post began spreading widely on June 30 after appearing on Facebook. An image featured on the post shows an illustration of a horse being fed into a meat grinder and turned into what appears to be ground beef.

The image also features a screenshot of a purported news article, titled “Wendy’s Exposed For Using Horse Meat,” that details the alleged bust by the FDA.

The article, which is filled with grammatical errors, claims that the FDA found traces of horse “DNA strains” while conducting a routine inspection of the fast food company’s meat.

An alleged quote from “Wendy’s Chief Executive Director Boris” even goes as far as to admit the use of horse meat.

“We only use 60% beef, the rest is made of meat fillers mostly equine(Horse) meat,” the quote states. “Using this type of meat is a cheaper expense for us, allowing us to competitively price our food while being profitable at the same time. What we are doing is not illegal or unhealthy. The FDA has approved the contents of the meat.”

Many users on Facebook appeared to believe that the claim was true while expressing their concerns in the comment section.

“Bro I’m sticking to the chicken,” one user wrote. “I never really liked they beef or cared for it it don’t taste but but damn bro 9/10 I got chicken.”

But at least a few users were skeptical of the allegations and pushed back on the unsourced image.

“So just none of y’all fact check anymore?” one user asked. “Just believe anything on social media.”

The users who questioned the validity of the claim were right to do so. Nearly every aspect of the claim is entirely false.

For starters, the FDA isn’t even responsible for inspecting meat. Such duties are instead carried out by the Department of Agriculture’s Food Safety and Inspection Service.

As noted by USA Today, no individual named “Boris” is on Wendy’s senior leadership team either, meaning the entire quote was completely fabricated.

Wendy’s has repeatedly denied the claim given that it has repeatedly gone viral for years. An analysis of Wendy’s Twitter account shows that the company has issued at least 23 tweets since 2015 denying the false claim.

​​So next time you bite into one of Wendy’s signature burgers, you won’t have to worry about inadvertently consuming cooked equine flesh.

Get rid of unwanted hair without breaking the bank

Stop overpaying for hair removal treatments and reveal soft, supple skin from the comfort of your own home with Nood. The Flasher 2.0 permanently removes unwanted hair in as little as eight weeks. Using Nood’s innovative FDA-cleared, skin-safe Full-Spectrum Pulsed Light Technology, the Flasher 2.0 effectively removes hair on your legs and arms. You can finally stop shaving with Nood.

🗣️ An Amazon worker went viral for posting a video where they roasted customers for ordering things that aren’t entirely needed, like a bag of chips.

🌯 Want a “hack” to get a $3 burrito at Chipotle? Well, here is how one TikToker says you can get it.

💄 A makeup artist is sharing what it was like being a professional makeup artist in the film industry. Including which celebrities were hard to work with.

🔥 There’s no denying it: Millennials aren’t dictating what’s hot these days. Get to know which of Gen Z’s favorite wellness, tech, and beauty products are the latest trends. *

🥝 Addison Grace successfully used the power of TikTok to market their music. If you want more stories like this, subscribe to the Passionfruit newsletter.

🌐 These students are ditching college to run an NFT business.

A video has gone viral for claiming that a bartender closed out the tabs of a group that was discussing reproductive rights in a post-Roe v. Wade United States. In the video, the user said the bartender asked why they booed the mention of the Fourth of July, and when they mentioned the Roe v. Wade decision, he brought them their checks.