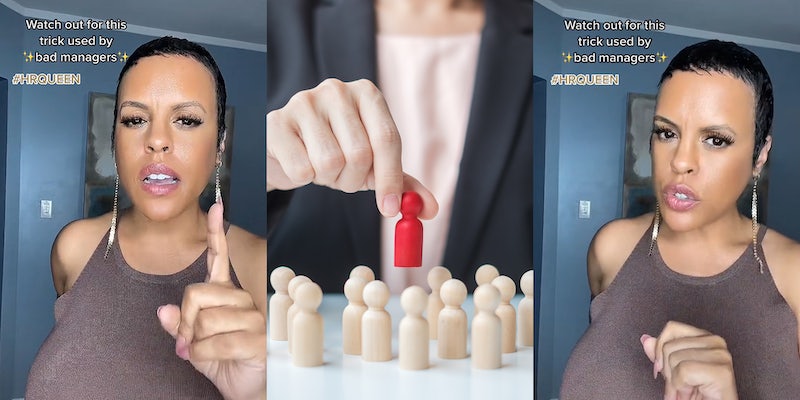 ‘It’s a common trick, and I want you to watch out for it’: TikToker shares trick ‘bad managers’ use in viral video

TikTok user Jha’nee (@_thehrqueen) went viral after posting a video in which she reveals a trick she says is used by “bad managers.”

The video has received over 533,000 views since being posted on Saturday, and Jha’nee, who refers to herself as a corporate mentor on her TikTok account, has since posted a follow-up video on what employees can do when their bosses attempt to use the trick.

“What they’ll do to keep their staff at a certain level—to keep giving out 3% or less raises—is they take your knowledge,” she explains. “They steal your knowledge, and then they make you feel incompetent.”

“It’s a common trick, and I want you to watch out for it,” she concludes.

In comments, users claimed that Jha’nee was telling the truth about this trick, with many stating that they experienced it in their own workplaces.

“Wow. This just happened to me,” one user wrote. “I quit my job on early retirement during the Great Resignation. She never saw it coming!”

“That’s EXACTLY why I left my job after 3 yrs,” another said. “Had ideas they would shoot it down then reword it months later as their own idea.”

“Exactly what my two bosses did to me,” a third wrote. “After asking to leave their team, I regained my confidence back.”

Others claimed this video made them realize what was happening in their current work environment.

“That’s exactly how I’ve been feeling with my current manager,” a user shared. “Working at getting my mojo back and looking to exit.”

“You may have just described my current situation!” a second exclaimed.

In her next video on the topic, Jha’nee explains what it may look like when the trick is being used and how employees should respond.

At the start of the video, she gives two examples of a boss stealing an employee’s knowledge and using it without crediting the employee.

“That means that they don’t have confidence in you—or they’re making you feel incompetent to keep you down here,” she says, referring to a low-level position in the workplace. “If this is happening to you, it’s something that you need to address.”

“First, assess the situation,” she continues. “Are you really messing up? Do you really not know what you’re talking about? If you do, then you need to have a one-on-one meeting, and you need to schedule it quickly.”

Update 6:22am CT, July 18: When reached for comment, Jha’nee offered more information about this alleged practice, claiming “stealing knowledge is something that happens all the time with bad management.”

“They use employees to perform certain tasks, work on certain projects, etc. because they don’t know how to perform the functions themselves, and then they stamp their name on the final product,” she told the Daily Dot via email.

“Additionally, some bad managers will take these ideas and then turn around and give the employee a bad performance review and/or make them feel incompetent in other ways to justify not giving out pay increases and/or promotions,” she continued. “In my opinion, it needs to stop because owners/management fail to realize that empowered employees are the most productive and valuable.”