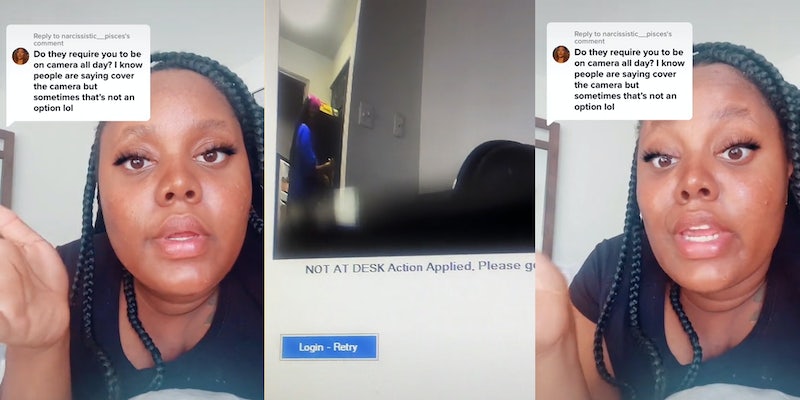 ‘You should always cover your camera’: Management sends remote worker photo of herself away from desk, suspends her for speaking out

'This level of micromanagement will keep them with a high turnover rate.'

In a series of viral TikToks, a remote worker alleged her alleged employer—an undisclosed customer service company that leads campaigns for finance technology company Klarna—spied on her through her webcam, locked her out of her computer for getting up from her desk, and suspended her for speaking out on TikTok.

In the first viral TikTok, which has over 410,300 views and was posted earlier in the week by TikToker Michae Jay (@_michaethemua), the worker shows her laptop’s screen, which is frozen with a webcam photo of herself away from her desk in her kitchen.

“NOT AT DESK Action Applied. Please get approval from Supervisor to retry,” the computer’s screen reads.

In a second video, the TikToker says she is not allowed to turn off her webcam—which monitors her and takes several pictures of her throughout the day—at work. She alleges her computer is locked if she is caught getting up from her desk, using a mobile device, or having another person is in the room.

In another video, the TikToker says she works for Klarna, a fintech company. However, in a message to the Daily Dot, she clarified she does not work directly as an employee for Klarna. Instead, she claimed she works for an external customer service company, which leads campaigns for Klarna. She declined to disclose the name of her employer, saying she is waiting to hear if she will be fired or not.

The TikToker also told the Daily Dot she was fired Thursday from her job because of what she posted to TikTok. However, in another video, she says although she was initially fired by a human resources employee, she was shortly called into a Zoom meeting where corporate employees informed her she was instead suspended until a further investigation into her TikToks could be conducted.

The viral videos posted by the TikToker sparked controversy in the comments section about employee surveillance and toxic work-from-home environments.

“This level of micromanagement will keep them with a high turn over rate,” one user debated.

“You should always cover your camera,” a third argued.

“Unfortunately I am not allowed to cover my camera. If it was up to me, I wouldn’t even have the camera plugged in,” the TikToker responds in a follow-up video.

In response to a comment that asked if the TikToker deals with personal information—and that’s why her company requires her activity to be monitored—the TikToker said she doesn’t deal with anything sensitive like social security numbers.

In other videos, the TikToker says she has additional complaints about her workplace. She claims she wasn’t warned when she accepted the job her pay rate would be dependent upon how many hours she works each week and says managers often try to argue employees work fewer hours than they did.

She also complains of unprofessional language allegedly used by managers and alleges the company does in fact have a high turnover rate.

“I gotta hurry up and find me another job. Only reason I took this job was because I really needed something at the time. And you know, I got a child so I can’t be B.S.-ing and stuff like that,” the TikToker says in a video.

The Daily Dot reached out to Klarna for comment via email.

“Yes I feel like everything they are doing is out of retaliation of me speaking out about how unprofessional they are. They had me going back and forth to the job because they forgot to put cords in my box and said they would only pay me for 2 hours of tech time. When it took 4. Then they FIRED ME then called back and added me to a zoom and said OH YOU ARE NOT FIRED you are suspended then called me yesterday and said I’m fired,” she wrote in a statement.

Update July 20, 11:09am CT: The Daily Dot learned [24]7.ai is the company in question and that it has since stopped webcam monitoring “any employee working on Klarna related campaigns.”

In a statement to the Daily Dot on Wednesday, a Klarna spokesperson confirmed it partners with the California-based software company and said it “asked [24]7.ai to investigate these claims” and “to stop webcam monitoring immediately for any employee working on Klarna related campaigns.”

“They confirmed this change has been made,” the spokesperson said of [24]7.ai.

“We take these matters extremely seriously and have asked [24]7.ai to investigate these claims so that the high standards we have at Klarna are being upheld by the companies we partner with,” the spokesperson added. “Klarna will not tolerate any form of discrimation or workplace abuse and will take appropriate action following [24]7.ai’s investigation.”