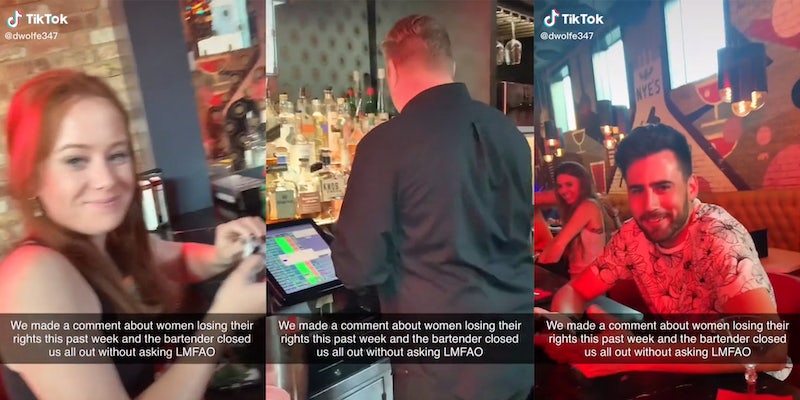 ‘We made a comment about women losing their rights’: Bartender closes patrons’ tabs without consent after they boo the Fourth of July

'Can’t even enjoy the bar anymore without my drinks being taken away too.'

While a majority of the country says abortion should be legal, per Pew, those opposed to reproductive rights can take great pains to make their opinions heard.

One such case of an apparent anti-choice person attempting to make a stand recently went viral after being posted on TikTok.

In a video that now has over 3.1 million views, user @dirtiestratking claimed their group was discussing reproductive rights when the bartender suddenly closed out all of their tabs, effectively kicking them out.

“We made a comment about women losing their rights this past week and the bartender closed us all out without asking LMFAO,” @dirtiestratking wrote in the text overlaying the video.

In the caption, @dirtiestratking elaborated.

“He asked us why we boo’ed at the mention of 4th of july and we mentioned roe v wade and then brought us the checks,” the user said.

@dirtiestratking said this occurred at Nye’s Bar in Minneapolis, Minnesota.

On TikTok, users offered their own responses to such an event.

“I would’ve said ‘damn can’t even enjoy the bar anymore with out my drinks being taken away too,’” a TikToker wrote.

While some said that the bartender was within their rights to close their tab, others stated it was simply unprofessional.

“Coming from someone that works at a bar as a bartender, I would have been fired if I gave my political view to any of my customers,” a user shared. “Unprofessional in this line of work. No matter what my views are or someone elses, this is a business and as a bartender I keep mutual no matter how much biting my tongue hurts.”

“As a bartender there’s things we don’t talk about like religion, political or any strong topics,” another echoed. “people are most likely to be more drunk at a bar top.”

“Deadass had to sit there and listen to someone complain abt the LGBT (im literally trans) cause i for sure would b fired,” a third recalled.

The Daily Dot reached out to @dirtiestratking via TikTok comment and Nye’s Bar via Facebook message and email.