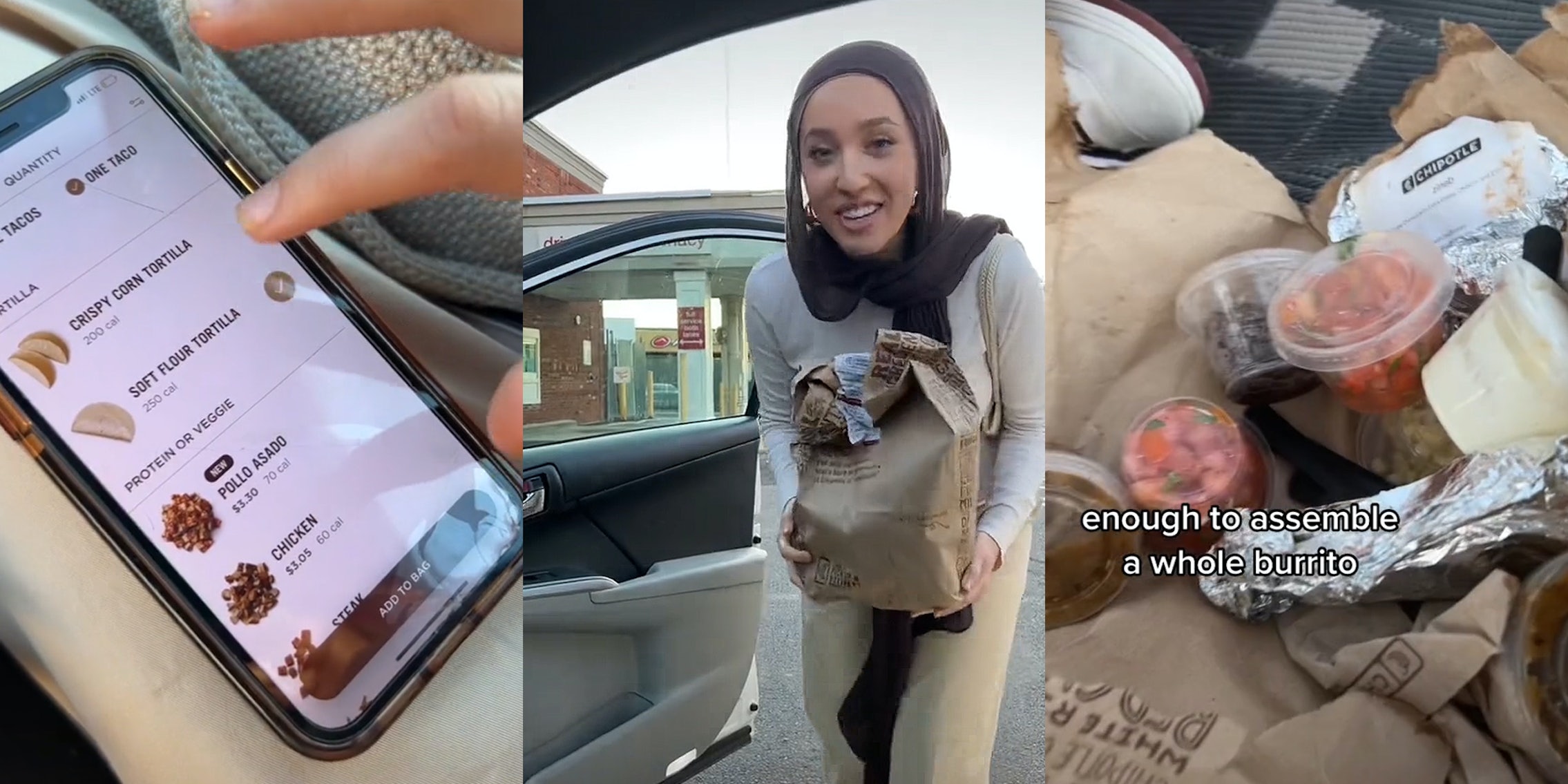 ‘I’m glad customers at my location don’t do this’: Chipotle customer shares ‘hack’ to getting $3 burrito

When it comes to content that’s about finessing any type of system, especially when it comes to saving money, you know folks are going to be on board. A video from @wyaleena is going viral on TikTok for showing users how to get an entire meal at Chipolte for under $5, and commenters are shocked that the hack actually works.

In the video, two girls claim to have discovered a “hack” that allows Chipotle customers to order what is essentially a $3 burrito from the popular fast-casual chain. Usually, Chipotle burritos cost anywhere from $6.50-$7.50, depending on the protein option selected.

they never make it right anyway

The TikToker demonstrated the money-saving tip by going filming the process on her friend’s smartphone: first, you have to start by building yourself a single taco on a soft flour tortilla. After you select your protein, you add sides of rice, beans, and any salsas or toppings you desire. The woman in the video stresses that it’s important to order the flour tortilla on the side.

The total for the order comes out to $3.35, but the TikToker’s friend says to just “wait and see the amount of food” that comes out. The video then cuts to the woman walking to the car with what appears to be a full bag from the store.

The pair then begin to unpack the bag and reveal tons of containers filled with enough toppings and veggies to assemble a whole burrito. So you’re basically paying less money in order to put together the meal yourself.

TikTokers who saw the hack held a variety of different opinions. Some appreciated the ingenuity while others remarked that she created a lot of container waste in the process.

One user wrote, “I get i but the plastic waste is killing me.” Another user agreed, “The amount of container waste gives me so much anxiety.” Chipotle as a chain recycles 49% of all its materials, with its biggest waste being cardboard.

Another commenter joked about the amount of meat: “Chipotle employees out here giving you a sprinkle of meat like they raised the chickens themselves.”

A third user pointed out that hacks like these have an impact on the workers: “this not even worth it and such a pain on the workers don’t do this pls.”

Chipotle employees in the comments section also chimed in and said that they hoped this trend doesn’t gain traction.

One user said, “Im glad customers at my location don’t do this bc I would just.”

Another said, “This is why I’m so happy next week is my last day working at chipotle.”

Others pointed out that whoever orders this way won’t be getting a lot of protein as a result, as tacos contain considerably less meat than burritos.

One user said, “but you’ll barely get any chicken.”

Another said, “this works but they skimp the protein and fajita veggies like crazy.”

There were some, however, who tried this hack and said that it actually works better in person, adding that you should put meat and rice on the side as well.

“I did this today. Protip, do it in person and get the meat on the side and rice as well. You get just as much as a burrito when you get it on the side.”

The Daily Dot has reached out to @wyaleena for further comment on TikTok.