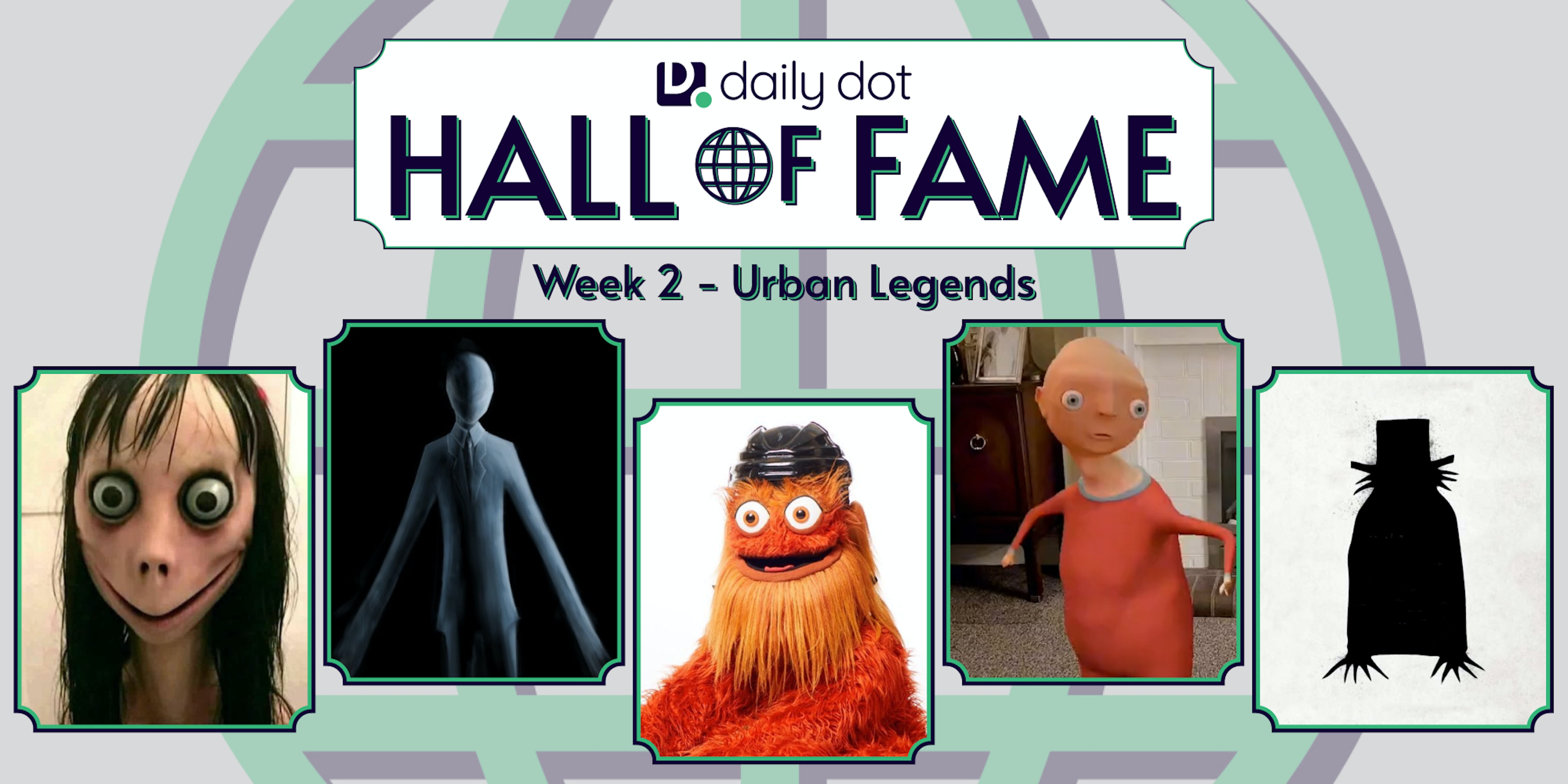 Who should be in the Daily Dot Hall of Fame? Sign up for the web_crawlr newsletter to vote!

In October, web_crawlr subscribers will vote on 5 categories—each made up of 5 nominees offered up by the editorial staff—and the 5 winners will become the inaugural Daily Dot Hall of Fame inductee class.

Today’s category is “Urban Legends.” Check out more about the hall of fame here.

If you want to vote in the next round of the Daily Dot Hall of Fame, sign up for web_crawlr to get the best and worst of the internet in your inbox.

It was a creepy sculpture by a special effects company that became a multi-platform monster: A photo of Momo reportedly began appearing across Instagram in 2016. Then WhatsApp. Then YouTube. It would reportedly be interjected into children’s programming and direct impressionable viewers to perform diabolical acts. It was a hoax that caused an international incident: The more parents feared it, the more it spread even as YouTube said it found no evidence that it was infiltrating its algorithms. Thankfully, the lack of documented crimes stemming from Momo’s influence mean that Momo these days is simply scary-as-hell.

The same cannot be said for Slender Man, the internet forum monster that in 2014, allegedly, inspired two young girls to kill their friend in Wisconsin. Created to win a photoshop contest in 2009 on shitposting website Something Awful, faceless and tall, the accompanying character targeted children in his fictional origin story. National headlines pertaining to the tragic and horrifying IRL crime led to bad Law & Order: SVU episodes and critically panned horror movies. Every Halloween, our internet culture writers have to reconsider his lasting impact. Legend has it, if you listen closely in the woods during autumn harvest moons, you can hear Audra yelling into the void as she’s assigned another Slender Man thinkpiece.

Is Gritty too mainstream for Hall of Fame consideration? Perhaps before the professional hockey mascot took on a life of his own online as a zany, loving, political dissident. He almost immediately became co-opted by the very-online left and unofficially welcomed as an antifa rebel. Gritty is an urban legend because while the mascot is all-too-real, on the internet, Gritty is anything you want: Friend, fashion icon, Inspo, firestarter.

OK so we have movie monsters going viral and inspiring hoaxes with Momo. Internet hoaxes inspiring real-life crime with Slender Man. What about movie monsters making the world a better place when the internet appropriates them as gay icons? At the risk of tipping the scales, I’m voting Babadook. The big bad from the 2014 Australian horror movie, Babadook enjoyed a second life as Tumblr’s unofficial Pride mascot. As Kris Seavers wrote in 2018:

“Some screenshots showed The Babadook under the LGBT category on Netflix… Users began circulating rumors that the monster, top hat and all, is queer. Nothing in the movie actually suggests that the Babadook is gay, or anything more than a symbol of rage and grief. It’s a terrifying charcoal drawing that comes to life as a shadowy basement monster. But that hasn’t stopped anyone from offering some pretty convincing theories. Plus, the Babadook has never explicitly claimed to not be queer. What’s stopping it from being gay?”

At last, a more modern internet urban legend. The story of Horace, a creepy, computer-animated dancing man, is that artist Jackson Q debuted him on TikTok. Then he soon went viral for being recreated in a video where he’s dancing on some Jordan sneakers. Then he became a great punchline for jokes everyone can make: When the guy at the bar buys you a drink and won’t leave you alone. Like the original dancing baby, Horace has grooved to many tunes, most notably Drake’s “Feel No Ways.” But he’s a “choose your own adventure” urban legend: Horace is apolitical unlike Gritty, asexual unlike Babadook, and harmless unlike Slender Man. Here’s hoping he isn’t co-opted by right-wing gamers and winds up on a biker’s vest as a patch.

To vote in next week’s round, sign up for the Daily Dot’s web_crawlr newsletter!