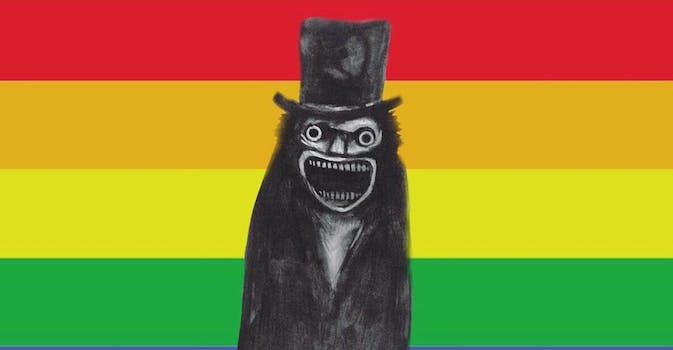 Why is the Babadook an LGBTQ icon now?

Is the Babadook gay? Now he is.

The Babadook wasn’t always, or possibly never. Three years ago, it was just the shadowy figure who came to life in the eponymous 2014 indie horror flick.

The Australian-Canadian film, while not a mainstream smash hit, received positive reviews and did relatively well for an indie horror movie.

But three years after the movie’s release, the Babadook himself has become a presence on Twitter and Tumblr and the unofficial internet mascot of Pride Month.

The humble beginnings of this meme seem to have appeared on Tumblr sometime last year. Some screenshots showed The Babadook under the LGBT category on Netflix (it’s no longer listed as such).

Users began circulating rumors that the monster, top hat and all, is queer.

8. the babadook is my favorite lgbt movie pic.twitter.com/dxCtyf9Kib

my new favorite Tumblr meme is insisting that The Babadook is gay pic.twitter.com/Id1PJpkkgX

Nothing in the movie actually suggests that the Babadook is gay, or anything more than a symbol of rage and grief. It’s a terrifying charcoal drawing that comes to life as a shadowy basement monster. But that hasn’t stopped anyone from offering some pretty convincing theories.

Plus, the Babadook has never explicitly claimed to not be queer. What’s stopping it from being gay?

"The B in LGBT stands for Babadook"

Pride Month began in June, and the meme came back around with members of the LGBT community adopting the monster as their dark but strangely fitting unofficial mascot.

Some renderings of a queer Babadook even cross paths with other gay memes, like Rupaul’s infamous puns from Rupaul’s Drag Race.

Some say the monster is a “thicc ass bih” and made a lyrics video, which is itself a riff on a Mr. Krabs meme that uses the Ditty.it app to sully a childhood icon with evocative lyrics.

And some Twitter users are now adding their takes on other horror films.

The Babadook may or may not have been gay, but thanks to the LGBTQ community, he sure is now.