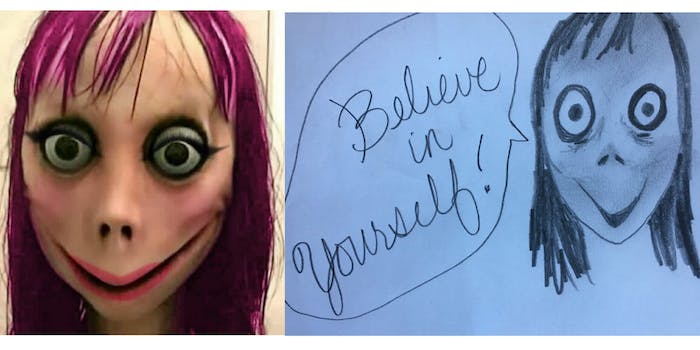 People are trying to make Momo a positive meme

She deserves better than what she got.

Unless you’ve been off the grid for the last week, you’ve probably encountered a photo of a dark-haired woman with bulging eyes and a creepy, toothless smile. She’s now known as Momo, and because this is the internet, there are now Momo memes.

News reports this week covered frantic parents who said the image of the woman—which is actually a close-up photo of a Japanese sculpture called Mother Bird—was used in a disturbing YouTube “challenge” that prompted their children to commit suicide or threatened to kill them. The photo of Momo was previously linked to several hoaxes and internet “challenges,” including on the messaging app WhatsApp. But it was the Momo challenge’s reported appearance on YouTube that frightened parents and caused mass panic this week. And it’s easy to see why: Many kids spend a lot of time on the platform.

Since the news broke, schools and authorities in the U.K. have issued warnings to parents. Yet YouTube did not find any evidence of the challenge on its platform and told the Daily Dot on Wednesday that “content of this kind would be in violation of our policies and removed immediately.”

Regardless of the challenge’s validity, the image of the Mother Bird sculpture is now everywhere on the internet. You can’t sign on to any social site without seeing her large eyes staring right at you. So, naturally, people are turning Momo into an earnest meme.

There are also some interesting Photoshopped images of Momo, including “makeovers” to make her appear less scary.

I gave #Momo a makeover so everyone can just relax now. #MomoChallenge pic.twitter.com/a6SwR4KHD0

Overall, people are trying to reclaim Momo as a positive, empowering character.

Momo is the Babadook’s sister-in-law pass it on

Hopefully, by this time next week, the “Momo challenge” will have evaporated from the internet, and we’ll just be left with some wholesome Momo memes.