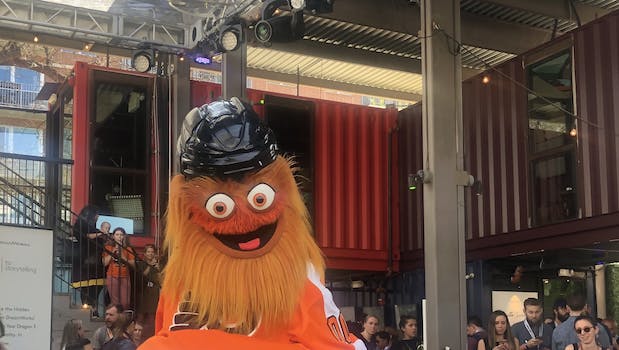 The beloved meme was the man of the hour in Texas.

On Saturday morning, I walked into a bar on Rainey Street in Austin, Texas, and immediately looked around for a flash of bright orange fur. When I didn’t see what (or, rather, who) I was looking for, I walked up to a person guarding an entrance and asked, “Where’s Gritty?” He didn’t seem to know about Gritty, so I pointed to a sign that showed him on the day’s schedule. “Gritty,” I repeated. “The mascot!”

It seems almost inconceivable that a person who is living in any major city in America isn’t familiar with Gritty. Last September, the National Hockey League unveiled the hairy creature with giant googly eyes as the Philadelphia Flyers’ new mascot. Gritty immediately became an internet sensation and a viral meme. He also turned into a symbol of the Antifa movement—his image regularly appears in protests and marches. And, unlike many other popular memes, people haven’t grown sick of them yet. Gritty performs stunts on and off the ice that only elevate his fanbase.

I wanted to meet Gritty in person from the moment I saw that first GIF of him quickly spinning to reveal a deranged (and permanent) expression. I knew I could see him if I went to a Flyers game, but meeting him is a whole other story. When I heard that Gritty was making an appearance at this year’s SXSW, I knew this was my shot. I was told that Gritty would be available for one-on-one meetings and photo opportunities at Container Bar, which became the Comcast NBCUniversal House. But Gritty wasn’t anywhere. I was worried that Gritty bailed or maybe partied too hard the previous evening.

Minutes later, Gritty appeared at the top of the stairs and came wobbling through the crowd of people at the house, who followed him like he was a movie star.

When I scrolled through the photos of our meeting later that day, I felt successful. The rest of SXSW would be downhill from here. But the longer I looked at the photos, the more I realized that I didn’t really know who I met. How many people wear the Gritty costume? His handlers are notoriously quiet about it. Who did I really meet? Gritty is like a role in a Broadway play—destined to be remixed for years by different performers. In the end, it doesn’t matter who is behind the Gritty mask. The mascot is beloved because of what we’ve projected onto him, and that’s love, inclusivity, equality, and chaos.