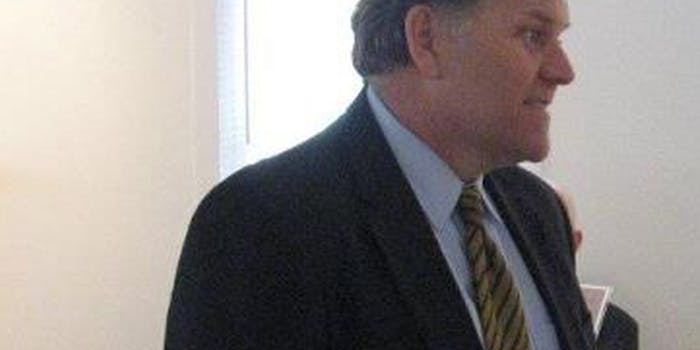 Rep. Mike Rogers is pushing his controversial cybersecurity bill after the Senate failed to pass the Cybersecurity Act of 2012 Thursday.

The same day that the Cybersecurity Act of 2012 failed in the Senate, the author of the controversial Cyber Intelligence Security Protection Act (CISPA), took the opportunity to push his own cybersecurity bill.

Rep. Mike Rogers (R-MI), who brought CISPA into the House of Representatives in November 2011, wrote in an op-ed in Politico Thursday that his bill is “the right way to protect America from cyber threats.”

CISPA is one of those cybersecurity bills seen by privacy advocates as “worse.” Its critics range from to President Obama to Reddit to a whole campaign of activists. CISPA would allow private companies—which have lots of access to lots of citizens’ data—to share that data freely with government agencies in event of a cyber attack. Activists say that their private information should stay private, and the government shouldn’t be given the opportunity to misuse it.

Rogers’s argument is predicated on the fact that everyone in Washington, it seems, agrees a cybersecurity bill is necessary. But while Obama and the Cybersecurity Act’s advocates in the Senate pushed the fear that cyber attackers could cripple American infrastructure, Rogers said the U.S. should focus on protecting its businesses.

“[T]he biggest cyber threat we face today,” Rogers wrote, is “the continual pillaging of nearly every sector of our economy by nation-states like China, who are stealing the core research-and-development secrets at the heart of our innovation economy.”

“The president didn’t mention this threat at all,” Rogers added.

Since the Cybersecurity Act failed, and since Congress is about to break for summer recess, it’s unlikely the U.S. will pass cybersecurity legislation this year.

Because CISPA did make it through a branch of Congress—it passed the House in April—the Cybersecurity Act’s defeat is a failure of leadership on Obama’s part, Rogers said. The President had been clear in his support of that bill, and his advisors have clearly stated he would veto CISPA.

CISPA, on the other hand, is bipartisan, Rogers said, as it passed the House with 206 votes from Republicans and 42 from Democrats. The Cybersecurity Act failed with heavy Republican opposition.

Rogers even mocked the idea of the Cybersecurity Act, which would have encouraged businesses to adopt stricter cybersecurity regulations on their own, though critics said that meant a slippery slope towards government-mandated systems.

Curiously, Rogers never mentioned CISPA by name or by acronym, instead just referring to “ a House cyber intelligence bill’ or “threat-sharing” bills. John McCain’s (R-AZ) Secure IT Act would also fall into this category, though it’s hard to imagine Rogers didn’t have CISPA, which he authored and which is far more well-known, in mind.