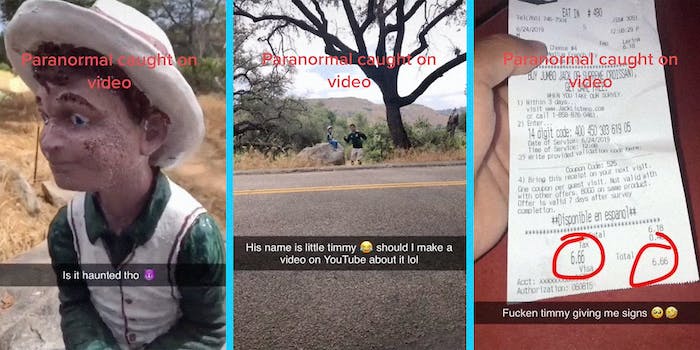 ‘We just found this sh*t in the middle of the woods, no lie’: TikToker makes fun of creepy doll—then things get ‘paranormal’

The user blamed the doll for a series of misfortunes.

A creepy viral TikTok shows a man making fun of a creepy doll in the woods near San Diego, but he now wonders if the Chucky-like doll haunts his life.

In the TikTok video, Isaac Martinez (@timmysayshi) films himself in contact with a large, creepy marionette doll, which he named “Timmy.” There’s no explanation of why he and his friends were in the woods. The overlay says: “Paranormal caught on video.”

“We just found this shit in the middle of the woods, no lie,” he says, before it shows him taking mocking photos with him beside the doll, which is positioned seated upright.

According to Martinez, if the entire affair is to be taken seriously, he began to experience a series of unexplainable misfortunes and events: A Jack-in-the-Box receipt showing a total of $6.66; his car was hit, he claims; and he has video of his camera glitching.

But it becomes more apparent that “Timmy” is a follower-grabbing gag when in the subsequent video, he says that after he gets to a certain follower count, he will divulge more details about the creepy doll. In this video, there’s now a dog sitting next to “Timmy.”

Finally six days ago, Martinez and his friends “apologized” to “Timmy.”