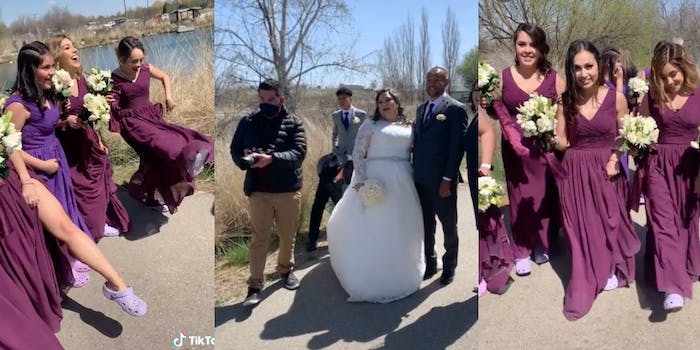 ‘The disrespect is real’: Viral TikTok of bridesmaids’ prank on bride divides viewers

'You would've not been in my wedding anymore.'

A viral TikTok video featuring a wedding prank is dividing viewers on whether it was too “disrespectful” toward the bride.

TikToker Gaby Rojas uploaded the video earlier in April. The video shows a group of women donning matching purple bridesmaids dresses and bouquets. The look, however, is questionably tied together with pastel purple crocs.

They pose and give the “shh” symbol before walking toward the bride and groom.

“When she said no to crocs,” Rojas’ caption read.

The bride appears to be shocked as she stares at the group with her mouth open. The video then abruptly ends, so it isn’t clear how she actually felt or whether the bridesmaids brought another pair of shoes to wear.

The video has over 8 million views, and there are over 16 thousand comments. Viewers seem to be mostly divided on whether the prank was “disrespectful” toward the bride considering she apparently specifically said “no to crocs” at her wedding.

“I hope y’all brought a change of shoes. The disrespect is real… you would not be in my pictures,” one said. “It is not hard to respect wishes.”

Many others agreed, saying, they, too, would be furious. “Yeah you would’ve not been in my wedding anymore,” another comment reads.

“Regardless if it was a joke or not the disrespect on her wedding day to do the opposite of what she wanted is just,” a third wrote.

Others, however, thought the criticism is unwarranted.

“I would have laughed so hard! Knowing my friends they would do this but definitely as a joke with a change in shoes. Not something to be pressed over,” one said.

As many guessed, the ladies brought actual heels to the ceremony, which Rojas explained in a comment and a “part 2” video.

The video shows some shots from the photoshoot of the bridesmaids showing off their crocs with the bride.

“For the ceremony and pictures, we did wear our heels! We only showed up to the location wearing crocs and for six photos,” Rojas said in a comment. “I’m suddenly aware of how seriously people take weddings.”