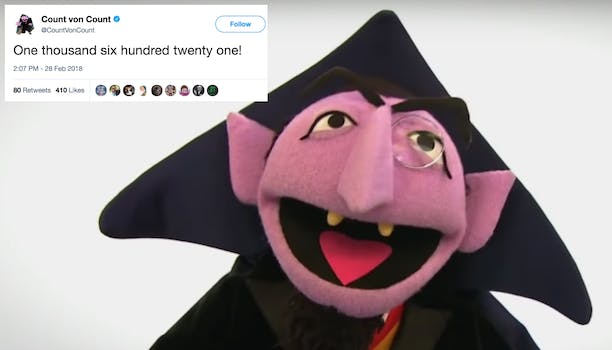 He just tweets numbers. That's it.

Do you remember Count von Count? He’s the vampire Sesame Street puppet whose goal is to teach kids about math. His name is a combined joke about Count Dracula and his love for counting everything. If it’s been a while since you watched an episode of Sesame Street, you might wonder what the Count is up to. Luckily, he has an active Twitter account. What does he tweet about? Take a look at his recent tweets:

One thousand six hundred twenty one!

Yes, the Count is counting on Twitter, and it’s comedic gold. He doesn’t tweet about anything else. He just continues to tweet out the next number, sometimes adding an “ah ah ah!” at the end.

Other Sesame Street characters are also using their Twitter accounts regularly—and replying to one another.

Time to practice my bugle!

Ernie!!!! I am trying to sleep! https://t.co/JHouIqJzAq

Back to rainy, rotten weather… MY FAVORITE! He he he.

All of the accounts are pretty amusing, but the Count von Count one is clearly the best one. How long will he tweet out numbers in succession? We hope it’s for a very long time. And because tweets can now be 250 characters, he won’t run out of space anytime soon.