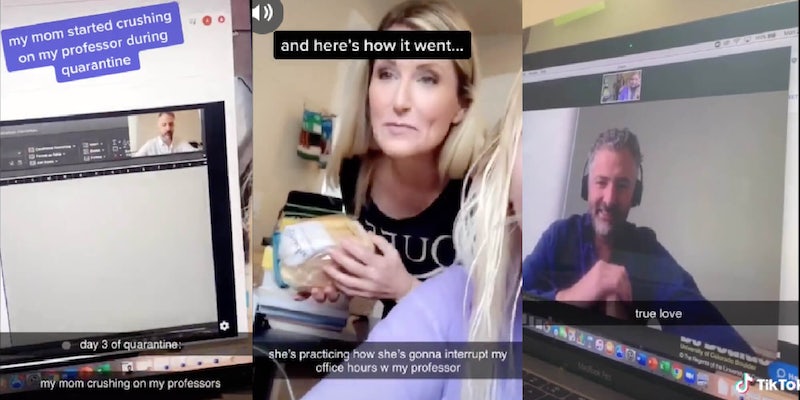 A college student from the University of Colorado Boulder is experiencing a brush of viral fame after a TikTok in which she orchestrates a “meet-cute” between her mom and her professor over Zoom gained millions of views, Insider reports.

In the TikTok, Aly Oliver’s mom walks in on her daughter during a Zoom call.

“Oh my God, that guy is a babe,” Oliver’s mom said after taking a peek at her daughter’s professor.

All this eventually led to Oliver scheduling Zoom office hours with her professor and her mom “accidentally” walking in on Oliver during the call.

Oliver made sure to tell her professor her parents were divorced prior to introducing the two. The mother-daughter duo did a practice run before the office hour call to make sure they executed the plan smoothly.

The video currently has over 2 million likes and has been viewed over 9 million times.

“I AM ROOTING FOR HER!,” user @ochoaxmarissa commented.

“I love that she glammed herself tf UP for that 1 minute screen time LMAO GET YOUR MANS MOM,” user @trashohr commented.

Oliver decided to warn her professor about the video once she noticed it gaining popularity and posted his response on her Instagram Story, Insider reports.

“Hi Aly,” her professor’s email said, per Insider, “Surreptitiously recording aside, that’s [an] endearing thing for a daughter to do for a mother.”

Oliver has not responded to the Daily Dot’s request for comment.

In a more recent TikTok, she shared with her followers an update on the whole matter.

“There’s not much guys,” Oliver said in her video. “They live in two different states.”

Her professor said she could keep the TikTok online as long as she wrote about the ordeal for an upcoming assignment.

“So, I’m currently writing a paper on TikTok,” Oliver said. “That’s college for you.”

Although, there hasn’t been any major developments thus far, Oliver said she doesn’t plan on retiring her scheming anytime soon.

“I’m going to drop my mom’s cellphone number at the end of my essay,” she said. “Because what do I have to lose.”