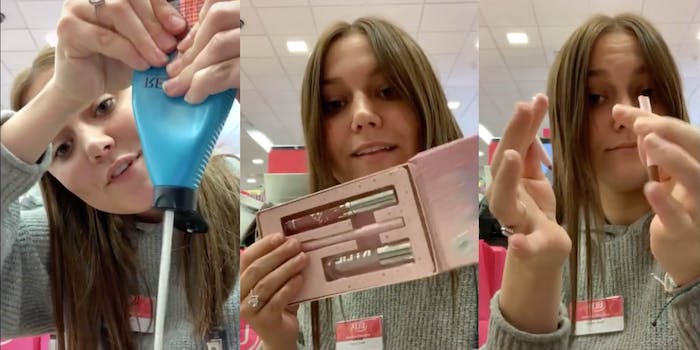 TikTok exposes what Ulta employees actually do with your returned items

NOT THE KYLIE LIP KIT.

An employee for a Wichita Falls, Texas, location of beauty store chain Ulta is exposing how the company deals with returns.

In a recent TikTok, Bianca Ann Levinson revealed that most products returned to an Ulta must be destroyed, rather than placed back on the shelves. Her video showed Levinson systematically destroying a palette of eyeshadow, a bottle of Redken hair product, and a Kylie Lip Kit.

“This is what we do at Ulta when someone returns something, even if it’s not used,” Levinson explains in the video, before scraping eyeshadow into the trash with scissors. “This is what we have to do. Yep. So that people can’t dumpster dive and steal it.”

In the final portion of her video, Levinson produces a Kylie Lip Kit. In what is likely the most distressing part of the video for viewers, she slowly tosses each product into the garbage. She even snaps the lip liner in half before throwing it away.

BuzzFeed interviewed Levinson about the video after it went viral on TikTok this week. She told the publication that her video aimed to inform people about what happens to returned products. “I was truly shocked that this is how returns were handled,” she said. She noted that, if possible, people should think twice before returning things.

Levinson noted that she struggled to perform the practice, called “damaging out,” when she first began working at Ulta. After a while, however, she began to understand why it’s necessary. “The main reason why things are damaged out is because of the possibility of cross-contamination,” she told BuzzFeed.

She also noted that dumpster divers, who steal products from the garbage and then attempt to resell them, are also an issue. She stands by her company’s policy when it comes to returned products.

Levinson claimed that on a typical day, nearly 50% of foot traffic is returns. “About 30% of the product returns are able to be put back on the shelf and the other 70% have to be damaged out and properly taken care of,” she said. A typical week sees more than $1,000 in returned products thrown out, she said.

The video is not intended as a condemnation of Ulta’s practices, but rather a means of informing the public. As Levinson noted, the act of destroying returned products is not unique to Ulta. Other makeup retailers, including “Sephora, Bath and Body Works, Target and Walmart,” according to Levinson, also engage in the practice. While she wishes the products could be put to better use—like through donations to shelters—Levinson continues to love her place of work.

She said she hopes shoppers might keep the reality of returns in mind. Rather than purchase a product you may decide against keeping, Levinson recommended samples or testing products before going ahead with a purchase.