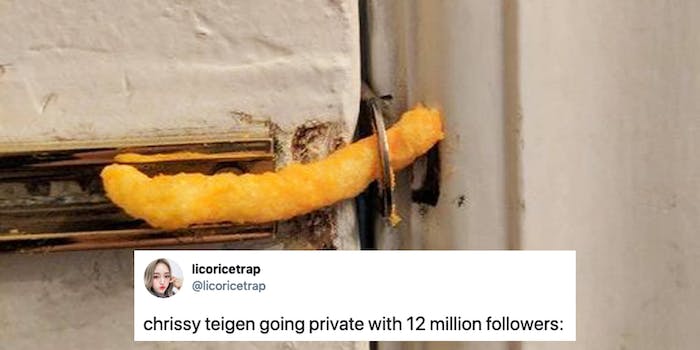 Chrissy Teigen made her Twitter private, and there are memes

The model turned mogul currently has over 12 million followers on the platform...

Over the weekend, Chrissy Teigen decided to take her Twitter account with over 12 million followers private, amid drama with New York Times columnist and cookbook author Alison Roman. In an interview with The New Consumer that published last week, Roman made some eyebrow-raising remarks about Teigen and her growing lifestyle empire—and how the thought of following down the same path “horrified” her.

“Like, what Chrissy Teigen has done is so crazy to me,” Roman said. “She had a successful cookbook. And then it was like: Boom, line at Target. Boom, now she has an Instagram page that has over a million followers where it’s just, like, people running a content farm for her. That horrifies me and it’s not something that I ever want to do. I don’t aspire to that. But like, who’s laughing now? Because she’s making a ton of fucking money.”

Roman also slammed minimalist lifestyle guru Marie Kondo in the same interview (who to be fair, seems a bit more deserving of the criticism) and was subsequently “canceled” online.

At any rate, despite the fact that Twitter initially rallied around Teigen, by Sunday the tides had turned—as they tend to do—and the Cravings author explained why she was taking a well-deserved Twitter break.

“I really hate what this drama has caused this week,” Teigen wrote. “Calling my kids Petri dish babies or making up flight manifests with my name on them to “Epstein island”, to justify someone else’s disdain with me seems gross to me.”

“This is what always happens,” she added in a second tweet. “The first day, a ton of support, then the next, 1 million reasons as to why you deserved this. It never fails.”

This isn’t the first time Teigen has taken her account private, however, she hasn’t locked it down since she’s achieved the level of fame she has now. (Perhaps even eclipsing her singer-songwriter husband John Legend at this point?) But again, with over 12 million followers, the gesture seems symbolic at best, which people are pointing out with Twitter memes, naturally.

But honestly, if there’s one thing we can probably all agree on with all this drama…

In all seriousness though, Twitter would never be the same with a Chrissy-sized hole in it. Take as many breaks as you want, but don’t you ever abandon us!