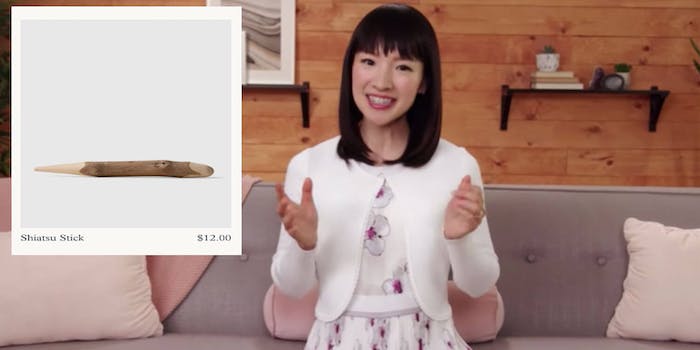 Marie Kondo, the “tidying up” guru who became famous for her tips on achieving and maintaining a clutter-free life, is facing criticism after launching an e-commerce store and selling what some are calling clutter-worthy junk.

People on social media just can’t get over the irony of it all.

Can't make this stuff up: Marie Kondo, queen of the clutter-free life, has added an e-commerce shop to her site https://t.co/R1uJH7T22Y

marie kondo playing the long game. get rid of your dumb shit, so you can buy *my* dumb shit. incredible. the next jeff bezos

Marie Kondo has opened a store, to sell you things.

Think about that for a minute.

Kondo became a household name after selling millions of copies of her book, The Life-Changing Magic of Tidying Up. In 2019, she snagged a Netflix series, Tidying Up With Marie Kondo. The series reached critical acclaim and made her decluttering and organizing methods all the more popular. Kondo argues that, in order for a person to live their best, most organized life, they have to only hold onto items that are essential,  “spark joy,” and “make you happy.”

Kondo’s new store, KonMari, is dedicated to household goods, including books, aromatherapy, bath essentials, decor, and organizing goods. The items being sold by Kondo include a shiatsu stick ($12), leather room shoes ($206), a robe ($115), a therapeutic tuning stick, and storage containers.

Many were quick to share their doubts about the essentiality of many of the items for sale on Kondo’s website.

Marie Kondo sells out. Wants you to get rid of your junk so you can fill your home with more junk bought from her new online store. And I do mean junk- a $12 stick anyone? pic.twitter.com/XGWe6sSoWc

Another, who describes themselves as a “#konmari lifer,” pointed out that Kondo was literally selling a stick and compared her to Gwyneth Paltrow‘s “lifestyle brand” Goop. Goop has been accused of promoting pseudoscience with its products.

Okay I will be the first to admit I'm a #konmari lifer but you guys she's SELLING A STICK. #wtf #goop2 #mariekondo pic.twitter.com/l4dj4ocfG1

“The new ‘meaningful items’ in the @MarieKondo shop that she made us make room for,” Twitter user @Ad_zurdo wrote, along with photos of the stick and tuning fork.

Still, there were some who rushed to the home organizer’s defense, arguing that her tidying methods are not about getting rid of nor never buying anything, but simply about only having things that bring you joy. One fan created a thread to respond to all of the criticisms being launched against Kondo.

“I am okay with people not liking Marie Kondo, if she doesn’t give you joy, it’s cool! Just disliking her for the things you think she said but didn’t is annoying,” they argued. “I looked through the stuff on MK’s website and none of it brought me joy, so I’m not getting it? And this is okay? And if it brings you joy then please go ahead!”