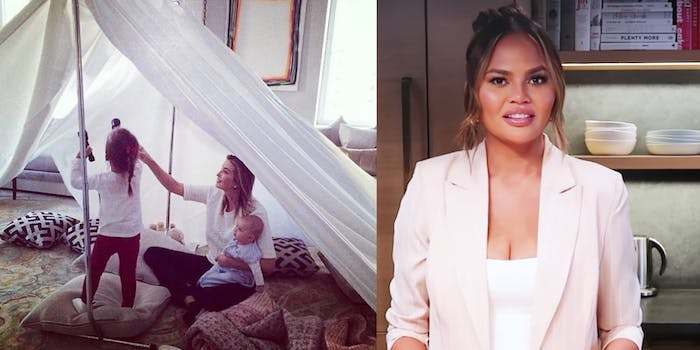 'After we quote pack unquote sandwiches can we please have Covid tests.'

Chrissy Teigen is no stranger to a classic Twitter drag, and Ivanka Trump is one of the latest people on the receiving end.

BuzzFeed reports Trump posted a tweet, which some are calling “clueless,” that suggests “a fun activity” parents can do while staying home with kids in order to help mitigate the coronavirus (COVID-19) spread.

The tweet features a photo of Trump and her children playing underneath a makeshift fort.

Part of the caption reads, “A fun activity that also brings family together for a meal! Share your ideas & use the hashtag #TogetherApart.”

Teigen, however, took a pointed jab at Trump’s tweet, highlighting the “botched” testing kit roll out for COVID-19 in the United States under the leadership of President Donald Trump.

“After we quote pack unquote sandwiches can we please have Covid tests,” she wrote.

Teigen’s tweet came at the tail-end of criticism from others as many unfurled their displeasure with Ivanka Trump’s tweet.

People pointed out various reasons as to why they thought the tweet was in poor taste: the Trump administration’s response to detained migrant children, people currently having to balance both work and child care during social isolation, and employees struggling financially due to lack of paid sick leave.

Rep. Ilhan Omar (D-Minn.) weighed in on the tweet, subverting Ivanka Trump’s use of the hashtag “#TogetherApart.”

“Thinking of all the families separated forcefully by your father’s policies today,” Omar tweeted.

Some also took notice that Ivanka Trump’s photo did not seem to actually be recently taken, BuzzFeed reports, as her children are considerably older than they appear in the photo.

Teigen and her husband, John Legend, previously have shown their disdain for the president and those acquainted with him. In an October 2019 cover story for Vanity Fair, Legend told the magazine, “(Trump) just proves himself to be a shitty human being every day.”

Ivanka Trump hasn’t responded to Teigen and other’s criticism. Instead, she’s opted to continually post updates about the coronavirus and her father’s response to the pandemic.

However, she did happen to upload a current picture of her children, sans the fort.