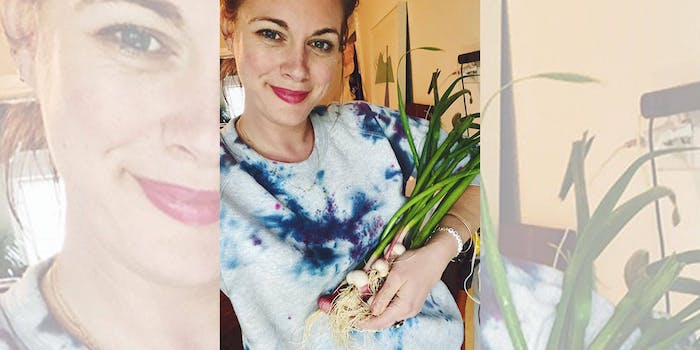 Chrissy Teigen tweeted that she was 'so bummed out' by her words.

New York Times writer Alison Roman is facing backlash after she accused Chrissy Teigen of running a “content farm” and said that Marie Kondo “sold out.”

Writer Michelle da Silva summarized why everyone is so upset in one tweet: “Alison Roman singles out Marie Kondo / Chrissy Teigen as sellouts, yet takes no issue w/ white women capitalizing on lifestyle content, asking ‘Does the world need another Goop?’ when reflecting on her own brand. Says a lot about who she thinks is allowed to build global empires.”

In her interview, Roman talks about her upcoming collaboration with the cookware startup Material.

“I would not ever want to put anything out into the world that I wouldn’t be so excited to use myself,” she says.

The interviewer then asks, “There’s a fine line between consumption and pollution, right?” In her response, Roman suggests that Kondo and Teigen have become sellouts.

“Like the idea that when Marie Kondo decided to capitalize on her fame and make stuff that you can buy that is completely antithetical to everything she’s ever taught you,” Roman said. “I’m like, d*mn, b*tch, you f*cking just sold out immediately! Someone’s like, ‘you should make stuff,’ and she’s like, ‘OK, slap my name on it, I don’t give a shit!'”

In the case of Teigen, Roman said, “She had a successful cookbook. And then it was like: Boom, line at Target. Boom, now she has an Instagram page that has over a million followers where it’s just, like, people running a content farm for her.”

Roman continued saying, “That horrifies me and it’s not something that I ever want to do. I don’t aspire to that. But like, who’s laughing now? Because she’s making a ton of f*cking money.”

Teigen responded to the comment with a thread of tweets in disbelief.

“This is a huge bummer and hit me hard,” Teigen tweeted. “I have made her recipes for years now, bought the cookbooks, supported her on social, and praised her in interviews. I even signed on to executive produce the very show she talks about doing in this article.”

“I want to clarify, I am not coming for anyone who’s successful, especially not women,” Roman tweets. “I was trying to clarify that my business model does not include a product line, which work very well for some, but I don’t see working for me.”